The economy tumbled at a 5.5 percent pace in the first quarter, but appears to be doing better now, even though heavy layoffs persist. 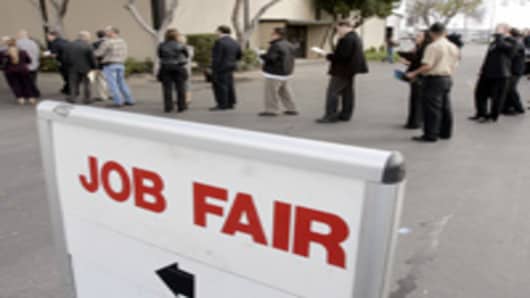 The revised reading on gross domestic product, released Thursday by the Commerce Department, showed the economy from January through March didn't fall as deeply as the 5.7 percent annualized decline reported a month ago. Economists expected the government would stick with its previous estimate.

The main forces behind the small upgrade in first-quarter GDP had nothing to do with an improving job market: businesses didn't cut stockpiles of goods as much and imports dropped more sharply than previously estimated.

Meanwhile, the rebound in consumer spending was a little less energetic.

Consumers boosted their spending at a 1.4 percent, down from a 1.5 percent growth rate estimated last month. Still, it marked the strongest showing in nearly two years and a huge improvement from the fourth quarter when skittish consumers slashed spending by the most in nearly three decades.

All told, the report showed the economic damage inflicted by the recession, the longest since World War II. The worst financial crisis since the 1930s, a housing bust and hard-to-get credit have eaten into businesses' sales and profits, forcing them to cut back production and jobs. In the final quarter of last year, the economy plunged at a 6.3 percent annualized pace, the most in a quarter-century.

Many analysts believe the economy isn't sinking nearly as much now as the recession eases it grip on the country.

For the current April-June quarter, economists predict GDP is sinking at a pace of between 1 and 3 percent. But that's not nearly as much as it had in the prior six months, the worst performance in 50 years. The government will release second-quarter results at the end of next month.

GDP measures the value of all goods and services produced within the United States and is the best barometer of the country's economic health.

Federal Reserve Chairman Ben Bernanke predicts the recession, now the longest since World War II, will end later this year. President Barack Obama's stimulus of tax cuts and increased government spending should provide some help, along with aggressive revival efforts by the Fed, including cutting a key bank lending rate to a record low near zero. 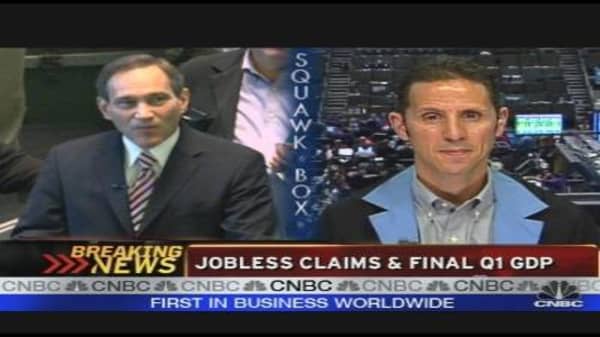 Many economists predict the economy will start growing again as soon as the third quarter, although the pace is likely to be plodding as economic recoveries after financial crises tend to be slow. That means unemployment will keep rising.

The nation's unemployment rate hit a quarter-century peak of 9.4 percent last month and is likely to reach 10 percent by the year-end. The jobless rate could rise as high as 11 percent by the summer of 2010 before making a gradual descent, economists say. The highest rate since World War II was 10.8 percent at the end of 1982.

The Labor Department on Thursday said initial claims for jobless benefits rose last week by 15,000 to a seasonally adjusted 627,000. Economists expected a drop to 600,000, according to Thomson Reuters. Several states reported more claims than expected from teachers, cafeteria workers and other school employees, a department analyst said.

The number of people continuing to receive unemployment insurance rose by 29,000 to 6.74 million, slightly above analysts' estimates of 6.7 million. The four-week average of claims, which smoothes out fluctuations, was largely unchanged, at 616,750.

Economists expect the number of initial unemployment insurance claims, which reflects the level of layoffs, to slowly decline over the coming months as the economy bottoms out.

The outlook for a shaky job market, which is likely to hinder wage growth, translates into a cautious consumer, another reason any recovery will be subdued.

And other risks abound. Skyrocketing foreclosures, rising interest rates and a worse-than-expected credit and financial conditions could send the economy into another tailspin. Economists don't think that is the most likely scenario, but it can't be ruled out.

In the GDP report, businesses' cuts to inventories ended up shaving off 2.20 percentage points from economic activity. That was less than the 2.34 percentage-point reduction previously reported and factored into the upward revision to first-quarter GDP.

Another helper: imports fell at an annualized pace of 36.4 percent, deeper than the 34.1 percent rate of decline previously estimated. That translated into a bigger boost to first-quarter GDP from trade. U.S. exports fell sharply but not as much as imports.

The government makes three estimates of the economy's performance for any given quarter. Each estimate of gross domestic product, which measures the value of all goods and services produced within the U.S., is based on more complete information. The third one came Thursday.