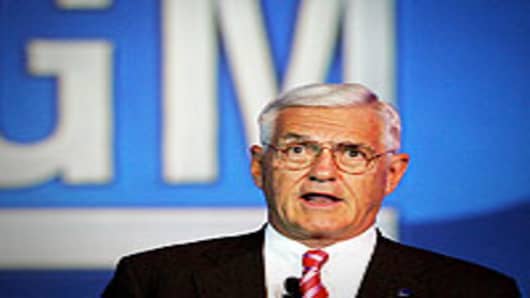 Same as the old boss.

As GM emerges from bankruptcyVice Chairman Bob Lutz, who had been scheduled to retire at the end of this year, will take over GM's marketing and communications.

His mandate: change the perception of GM , its brands and models.

Talk about taking on a tough job.

Lutz was scheduled to retire at the end of this year. To ride off into the sunset after a glorious career in the auto business. But Bob wasn't ready to go, and GM CEO Fritz Henderson realizes he would be wasting a golden opportunity if he didn't incorporate Lutz into the new GM. So Lutz will stay and take on the tough job of changing perceptions and feelings toward General Motors. He may be the right person at the right time for this job.

Yes, I know that right now some of you are rolling your eyes and are saying, "What! Are you nuts? Lutz is one of Rick Wagoners boys who ran the company into the ground, so why should we believe he can change perceptions of GM?" Believe me, I've heard it from many of you. It's a legitimate comment, but also misses the point.

In the old GM Lutz was primarily a product man.

He was the force behind GM rolling out winning models like the Camaro, CTS, and Malibu. While he did that, the GM marketing plan floundered.

The was little cohesion and a lot of forgettable campaigns. In the new GM, Lutz will be shifting from product to marketing.

His goal is to make American say, "It's cool to buy a Chevy, Caddy or GMC."

Inside GM, many call Lutz "Maximum Bob" because he goes full bore, often unfiltered, when commenting on what he likes, dislikes, believes, etc. It's a double edged sword with Lutz. On one hand his unfiltered candor is refreshing. On the other, he's been known drop some bombshell comments like the time called global warming a "crock of #&*#!!"

You wonder if GM CEO Fritz Henderson is ready for the awkward moments that will come with Lutz in charge of GM communications with the public. My guess is he is willing to take the occasional headache along with all the positives that Maximum Bob brings to the table.