Call it the silver — er, green — lining of the housing crisis. 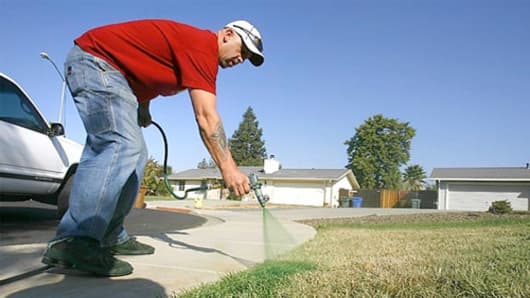 One of the few businesses booming in this recession is lawn painting, which has gotten a huge boost from all the foreclosures — and dead lawns that result when homes are abandoned.

These companies will come in, clean up any litter on the lawn, mow it and trim it — then paint it green.

“It gives a house curb appeal, so when prospective buyers drive up, they know they won’t have to spend X number of dollars fixing up the lawn,” said TJ Davis, a retired fire captain in southern California, who founded the lawn-painting service Green Genielast fall. “Plus, the neighbors love it,” he added.

Companies like Green Genie are hired by banks, real-estate agents, towns, and sometimes even neighbors sick of looking at the eyesore of a dead lawn on the foreclosed house next door.

This isn’t a new concept: This is the same stuff that’s used to paint team logos on football fields and what golf courses use to give the grass a lush appearance. Real estate agents have also used it for years to spruce up lawns for open houses — particularly during droughts and water shortages.

What is new is how many companies have sprung up in the industry since the housing crisis began and how much their revenue has soared.

Davis said it’s been the perfect storm for his business: California has one of the highest foreclosure rates in the nation and it’s experiencing a drought right now.

Green Genie has already painted three dozen lawns for the city of Rancho Cucamonga and the city has contracted it for another 50 more.

Green Genie charges 25 cents a square foot, so the average lawn would cost about $250 to $300. It takes about an hour to dry and lasts for up to four months. And, the answers to questions everyone wants to know: Yes, it’s safe to lay on (after it dries, of course) and for pets to run around in — and it won’t run in the rain.

Budget-conscious consumers can buy just the paint online and do it themselves, using the same sprayer used for fertilizer.

At GrassBGreen.com, which sells lawn paint exclusively through its Web site, one quart of paint (enough for a typical 1,000-square-foot lawn) costs $55 — about $70 to $75 when you add shipping and handling.

The company said sales have double since last year and tripled from previous years.

“The first few years, our customers were mostly private homeowners who had pet urine spots or overfertilized their lawn,” said Scott Nelson, the customer-service manager at GrassBGreen. They also did a lot of work with golf courses and RV Parks. “Now, it’s more businesses that are doing foreclosure prep,” he said.

Well, you know what they say, the grass is always greener.

You just didn’t know they meant on the foreclosure side!