House Financial Services Chairman Barney Frank (D-Mass) is working on an alternative version to Obama administration legislation that would create a Consumer Financial Protection Agency as part of sweeping regulatory reform of the financial services industry, according to a Congressional document. 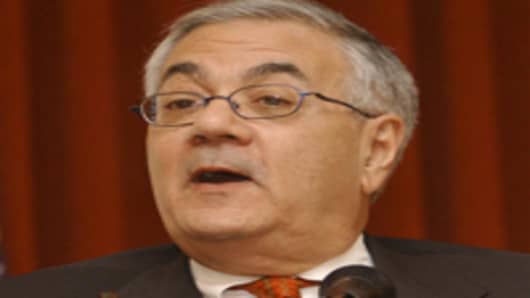 Frank outlines the changes in a memo to Democratic members of the panel, saying he would soon be releasing an “initial revised discussion draft...intended to be responsive to the primary concerns Members have expressed to date.” CNBC.com obtained a copy of the memo which is dated Sept. 22.

The emergence of an alternative plan for the somewhat controversial new agency comes as Congress resumes work on the regulatory reform plan, which was formally outlined by the White House in June. Frank’s committee will hold a public hearing on the agency later this month.

“The discussion draft will make several key changes to the Obama Administration’s draft legislation to make clear that CFPA will not disrupt merchants, retailers and other nonfinancial businesses or subject banks and other depository institutions to needless additional regulatory burdens and costs,” the memo states. “At the same time, CFPA will have a mandate to set strong rules that all financial institutions—both banks and nonbanks—will have to follow when providing financial products and services to consumers.”

The White House outline of the agency, first released in mid June, requires firms to offer a variety of basic, or plain vanilla, products, such as home mortgages.

The House plan also addresses the heretofore-unanswered question of funding for the consumer agency. The White House has floated the idea of charging firms fees, similar to what it does for the FDIC’s deposit insurance fund, but sources familiar with Frank’s thinking have previously ruled that out. Others have speculated that the agency budget would come out of the federal government’s general operating budget, which funds other agencies.

Instead, the Frank memo says, “to ensure adequate funding of CFPA without placing additional burden on financial institutions, the Federal Reserve will fund CFPA at a level that reflects amounts the banking agencies currently pay for consumer compliance."

The discussion draft is also expected to say that non-financial businesses would be exempt from CFPA regulation and oversight, but nonbank firms will be subject to assessments.

Frank's committee is taking up the issue of the consumer agency before the other remaining parts of the financial reform package at the request of the president. The House already approved a bill on executive compensation in July, shortly before its August recess. Other measures include banking supervision consolidation, the creation of a super, or systemic, regulator, and resolution authority to deal with too-big-to-fail firms.