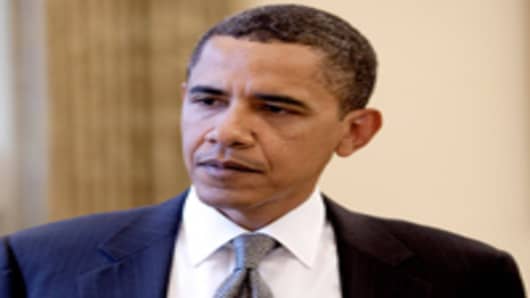 The hopeful mood that accompanied the start of President Obama's term has given way to deepening concern about the nation’s economic troubles, according to a new NBC News/Wall Street Journal poll.

In the survey, a 52 percent majority of Americans described the nation as headed "off on the wrong track," compared to 36 percent who said the U.S. is "headed in the right direction." Though Obama's overall approval rating remained unchanged at 51 percent, assessments of Obama's handling of the economy have declined.

Some 47 percent approve his economic stewardship, down from 50 percent in September, while 46 percent disapprove, up from 42 percent in September. The telephone survey of 1,009 adults, conducted Oct. 22-25, carries a margin for error of 3.1 percentage points.

One reason for that gradual erosion may be an increasing sense among voters that Obama should be held responsible for economic conditions at a time when unemployment stands at 9.8 percent and is expected to continue rising past 10 percent. While Americans by 3 to 1 say Obama inherited today's economic difficulties rather than caused them, that assessment was an even more lopsided 5 to 1 in June.

The rise in financial markets that recently sent the Dow Jones Industrial Average past 10,000, though it thrilled Wall Street, has had a lesser impact on average Americans, the poll showed. Just 32 percent call crossing the 10,000 barrier a sign of significant economic improvement, while 64 percent said it doesn't change their assessment of economic troubles.

At the same time, public support for Obama's energy initiative declined modestly. By a narrow 48 percent to 43 percent, Americans said they'd support requiring companies to reduce greenhouse gas emissions even if that meant higher utility bills. In April, Americans backed that idea by a more robust 53 percent to 40 percent.