Alternative-rock band Weezer, known for its hipster coolness, is using possibly the uncoolest thing on the planet to promote its new album: a blanket with sleeves. 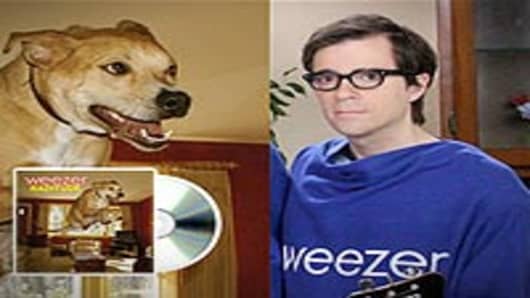 If you buy a Weezer Snuggie (a Wuggie) for $30, you get their new album, “Ratitude,” for free. They also have a deluxe pack, where you get a ZEBRA Snuggie and a special edition of the CD that has four extra tracks.

It is, of course, meant to be ironic — like when the trucker hat became popular with 20-somethings. But blogger Marshall Kirkpatrick points out that it’s also likely a sign of the times:

“It's pretty funny, really. People do seem more willing to buy these ridiculous blankets with armsthan they are to pay for music these days. I think that's the point.”

They even have an infomercial for the Wuggie, complete with cocoa-sipping and foot-rubbing while the whole band snuggles in their Wuggies. Here's how they made it:

("Ratitude" was put out by Universal Music Group, a division of General Electric, which is also the parent of CNBC.)