GE, Comcast Accord on NBC Universal Now Set for Nov. 16

General Electric and Comcast are now expected to announce a deal over GE's NBC Universal unit on Nov. 16, not next week as originally thought, people familiar with the situation told CNBC. 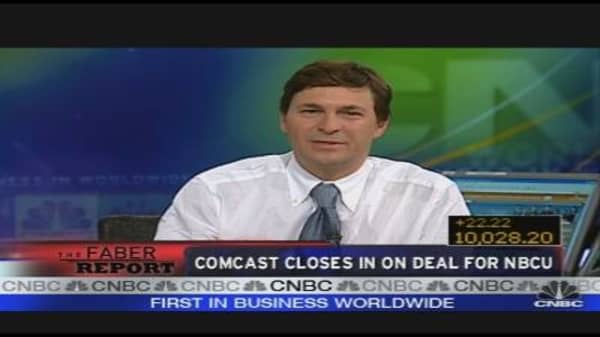 Talks between the two companies are said to be on track and closing in on a deal, under which GE —parent of CNBC and CNBC.com— will shed 51 percent of NBC Universal to Comcast and hold the remaining 49 percent.

The joint venture is being valued somewhere around $30 billion, sources said.

The key caveat is the price it will take for for the French media company Vivendi to shed its 20 percent stake in NBC Universal. The company has the right to register the shares for an IPO, giving it some leverage in negotiations.

If the company decides to register for an IPO, the entire deal between Comcast and GE would be scrapped. But sources said they don't expect that to happen.

News Corp ,once an interested party in the acquisition of NBCU, is no longer pursuing the media network.

Rupert Murdoch expressed in his earnings conference call Thursday that his company preferred to build on the franchises it already owns versus new acquisitions.

Meanwhile, Bernstein Research upgraded GE Friday, in part because of pending divestitures such as the NBC Universal stake.

David Faber“Squawk on the Street” Co-Anchor