Why the US Dollar Will Likely Remain Weak for Some Time

The dollar is weak. Get used to it.

The U.S. currency's fate is tied to market speculators, geopolitics and economic-trade crosswinds and will remain weak for both the short-term and mid-term, unless major governments take unusual steps to intervene. 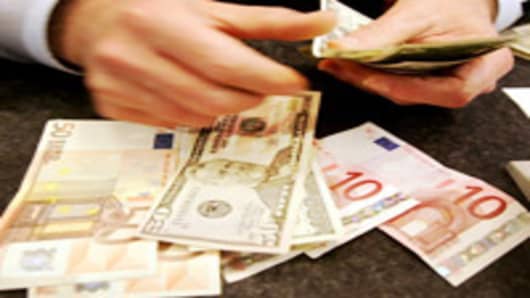 “There's been a very dominant trend since 2001,” says economist Chris Rupkey of Bank of Tokyo-Mitsubishi. “The foreign exchange market often deals with themes and it sometimes difficult to change those.”

And those themes, or trends, often remain in place for years. Since 2000, for instance, the dollar has slid from a record high against the Euro to a record low.

Though the U.S. currency is now very weak by historical standards, it has been this weak before. On a trade-weighted, inflation-adjusted basis, the dollar was actually weaker at two points in the 1970s, once in the 1990s and as recently as the first quarter of 2008. Of course, it was much stronger for much of the early 1980s, when it hit a record high. (see chart below)

“The charts suggest this is the new reality for awhile," says Robert Brusca, chief economist at FAO Economics. “Clearly, the dollar has to be weaker. That's rational."

Most economists are unwilling to declare that this is, in effect, a new dollar—weaker, of little stature and at immediate risk of losing its status as the world's reserve currency. At the same time, the greenback is unlikely to make a roaring comeback, as it did in the mid 1990s, the last time the doom-and-gloom quotient was high and market and political analysts galore were bemoaning the debilitating drag of the twin deficits (trade and budget).

At that time, then-Treasury Secretary Robert Rubin essentially launched the we-want-a-strong dollar mantra, which though very effective at first, has since become empty political rhetoric.

That’s where the national pride comes in. The world’s only superpower (for now) should have a powerful currency, reflecting its economic and military might. The difference this time is that a new economic-military superpower with a huge trade surplus is emerging: China.

Given all this, it may be difficult, if not impossible, to achieve a strong dollar again. Nor will it become some sort of Banana Republic peso, even with the federal borrowing binges of the Bush and Obama administrations.

Conventional wisdom says that exchange rates are mostly a reflection of interest rates. The higher the rate, the more attractive the currency, as investors seek the best return on their investment. Many of those dollars get used to buy Treasurys or other U.S. assets.

Right now, not only are official U.S. rates at rock bottom, they are about a full percentage point lower than those set by the European Central Bank.

Though many expect the Federal Reserve to be among the first to raise interest rates as the global recovery kicks, that is unlikely to happen until late next year.

“This environment automatically allows leverage speculators to short the dollar and buy gold short-term,” says veteran Fed and dollar watcher David Jones of DMJ Advisors. “Then there’s the carry trader—you borrow in low-interest dollars and invest in commodities currencies, like the Australian Dollar and Brazilian Real, and that makes the dollar even weaker. That will happen as long as Fed is easy.”

What's more, the economies of both those countries have grown enormously during the recent commodities boom, which has cushioned the blow of the global recession. Australia, for instance, raised rates months ago.

In the current post-crisis environment, there may be more than meets the eye to the classic interest-rate dynamic.

Next to Canada, the U.S. had the mildest recession. At the same time, payrolls here were cut the most, while productivity surged.

"Which currency should be going up? It's the dollar, " says Bhagavatula. "There's an issue with policy structure."

An analysis of central bank policy showed "the Fed stands out as the central bank with the most explosive stimulation. This accommodation was a substitution for rate cuts."

"The policy of accommodation has outlived its usefulness," Bhagavatula says.

Still, other economists say any interest rate differential in favor of the U.S. may be both fleeting and modest.

Since it’s inception around the turn of the century, the ECB has erred on the side of tight money and high rates, which happens to coincide with the dollar’s slide.

What’s more, Japan has practiced a zero-to-low interest rate policy for more than a decade and the dollar has never shown enormous strength against the yen. Now, however, with rates about the same, the dollar-yen exchange rate is about 80, barely higher than early 1995, the time of the last dollar hysteria.

Inflaton Not a Worry

At best, favorable interest rate differentials may put a floor under the dollar, but they are unlikely to make it strong.

Worries about a weak dollar’s role in the inflation equation have also been overstated, say economists, even if it contributes to higher commodities prices. 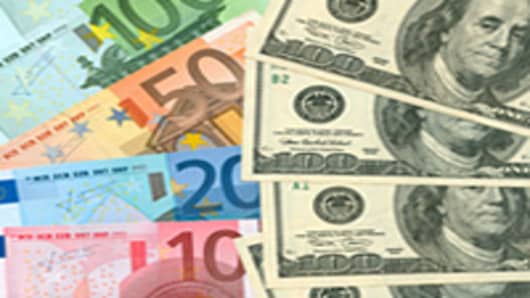 “The relationship between the dollar and U.S. inflation is very diminished,” says Brusca, who notes that inflation failed to rage during the weak dollar-string commodities boom of recent years.

Exchange rates may be more a function of global trade than anything else and that goes well beyond the simple notion that the U.S. has a bulging trade deficit.

"It's not just interest rates anymore," says Frank Vargo, vice president for international economic affairs at the National Association of Manufacturers. "Trade flows are very important and lately the markets give more weight to trade."

For years now, most of the world’s largest economies and America’s major trading partners—Germany, Japan, France, South Korea, Brazil—have pursued economic policies emphasizing exports, which are facilitated by weak currencies. The U.S. has been a stark exception.

Conversely, domestic demand in countries like Germany and Japan has been relatively weak, but strong in the U.S.

“Everything is export driven,” observes Jones.

"There's got to be more domestic-led growth in these countries," says Vargo. "That's what the G20 has been talking about."

In the 1980s, Japan’s booming, export-driven economy and undervalued dollar was a problem for the U.S. The Plaza Accord of 1985 addressed that issue with an agreement to devalue the dollar. (In a two-year period, it lost about 50 percent of its value.)

“How do trade imbalances get changed over time?” asks Rupkey. "Witness the Plaza Accord. A country gains a trade advantage and then the free market creates a correction in currencies. You make the currency appreciate and in doing so then make it too costly to export.”

Of course, that can’t happen with China, which has replaced Japan as the new world trade Goliath, because its currency, the yuan, essentially has a fixed rate, even though it is loosely pegged to a basket of currencies.

“One of the biggest things that stands out in this crisis is that one of our biggest trading partners is not seeing its currency appreciate,” says Rupkey.

At the same time, China is not immune is hardly to the consumption-import-export–growth dynamic.

Jones points out that the U.S. trade deficit fell from a peak rate of 6 percent of GDP in 2007 to about 2 ¼ percent in the second quarter of this year, during the depth of the recession, which followed six quarters of contraction in consumer spending. (Since then, the percentage has been moving up as the economy improves). During roughly the same period, trade shrunk from 10 percent of China’s GDP to 6 percent.

“If the trade deficit stays his low is China going to continue to accumulate dollars?” asks Jones.

“Free market forces really need to change here,” says Rupkey. "The burden is really more on the Chinese side.”

“It’s not an easy adjustment to get the Chinese to increase domestic demand." says Jones.

The U.S.-China trade dynamic has become all the more complicated at a time of soaring Washington borrowing, creating a revolving door of dollars, which may even put further pressure on the U.S. currency.

This has been going on since the presidency of George W. Bush, when the deficit-to-GDP ratio matched Reagan-era levels of 6 percent. Given the financial crisis and the Bush and Obama administration policy responses, that ratio is now about 10 percent. 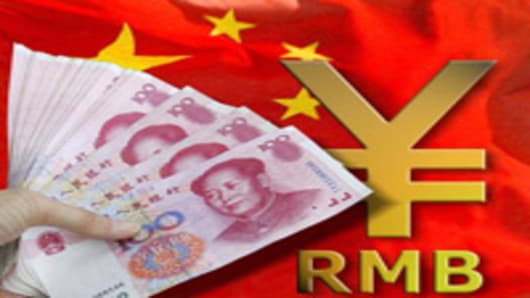 There were howls during the Reagan years, but there were two key differences then: the strength of the dollar and the identity of the Treasury buyers.

“It’s a much more unstable and dangerous world,“ says Jim Rickards, senior managing director at Market Intelligence “The single biggest difference is that in the 80s our creditors were Japan, Europe and the Arabs. All were utterly dependent on us for their security; our national security was their national security. [China doesn’t] depend on us for national security. We don’t have the lever to keep them in line economically, in effect force them to buy Treasury securities.”

The symbiotic relationship between the U.S. and China and its impact on trade flows, investment and exchange rates should be of greater interest to the other key players in the global economy.

Economist after economist called it unsustainable.

The twin deficits, say economists, are something that makes people want to sell the dollar, weakening it further.

Over the years prior to the single European currency, German exporters, for instance, howled when the dollar was too weak against the Deutsche Mark; their tolerance level with the Euro/dollar rate is now thought to be 1.55, which is not far from the pre-crisis level of 2008. At roughly 1.48, now the dollar is down about 25 cents since March.

"The dollar is definitely competitive now and we are seeing our exports beginning to pick up," says Vargo.

And though trade may not be the job engine the housing and financial sectors were in recent years, it is certainly producing jobs—and at a time when the economy is losing more jobs than it creates every month and the unemployment rate is in an uptrend. 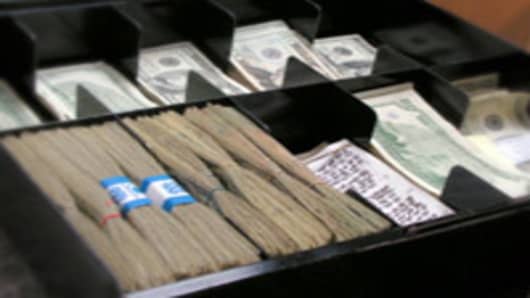 Those most worried about the dollar policy think the Obama administration and/or the Fed can and should do something about it. Currency market intervention, however, has been rare and limited in the past decade.

Bernanke surprised the markets recently by addressing the weak dollar, which seemed to put a floor under the currency—at a level not too different than when the central bank boss last addressed the subject in June 2008, as crude oil was pushing $200 a barrel.

“As long as the decline is orderly, the Fed thinks it is a necessary part of the global readjustment,” says Mickey Levy, chief economist at Bank of America.

For now, words not deeds will probably suffice for policymakers. What's to lose other than a little more value?

Economists say speculation about the dollar losing its place as the world's reserve currency is is wildly premature.

For one, "there is no alternative," says Brusca.

In addition, reserve-currency changes are multi-decade events, as when the dollar replaced the British pound after WWII, when its economic and military superiority were entrenched.

Such a shift would probably also require major political developments, such as the creation of a European republic—well beyond the current economic and monetary union—or a democratic China with a free floating yuan.

Economists say there should be more pressure on Beijing than the U.S. to do something.

"The dollar over the next year or two will tend to see downward pressure because our recovery will be fragile and uneven, and consumers will spend less than they usually do," says Jones. "That's why this adjustment is going to be so be so brutal.”