According to a Monday report, water demand in 20 years will be 40 percent higher than it is today—and more than 50 percent higher in the most rapidly developing countries. What areas of the water sector should investors consider? Michael Gaugler, senior vice president of research at Brean Murray, Carrett & Co., and Debra Coy, senior analyst at Janney Montgomery Scott, shared their views. 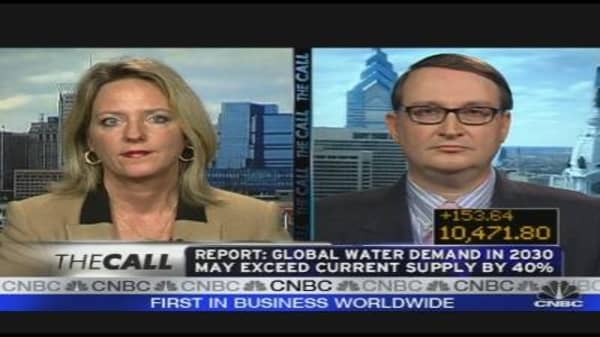 “Therefore, as prices go up, investment should increase. So we think that the water utilities, which are efficient providers of water in the private sector, will benefit; and water infrastructure companies that do things like desalination and water reuse will benefit.”

In the meantime, Gaugler said the U.S.—aside from California—shouldn’t have to worry about water issues. But elsewhere it's a different story.

“Globally, southeast Asia, particularly China, has some real water issues,” he said. “The cost of water is going to be higher in areas where water is a finite resource. We are pretty spoiled in the U.S. because water is pretty accessible to us.”

Coy personally owns and has investment banking clients who own shares of AWR, CWT and TTEK.

Coy’s firm is a market maker in the securities of AWR, CWT, TTEK, CWCO and INSU. Janney Montgomery Scott managed or co-managed public offering of securities for AWR and INSU.

No immediate information was available for Gaugler or his firm.