Ali had Frazier. Coke has Pepsi. The Yankees have the Red Sox.

Now Wal-Mart , the mightiest retail giant in history, may have met its own worthy adversary: Amazon.com .

In what is emerging as one of the main story lines of the 2009 post-recession shopping season, the two heavyweight retailers are waging an online price war that is spreading through product areas like books, movies, toys and electronics.

The tussle began last month as a relatively trivial but highly public back-and-forth over which company had the lowest prices on the most anticipated new books and DVDs this fall. By last week, it had spread to select video game consoles, mobile phones, even to the humble Easy-Bake Oven, a 45-year-old toy from Hasbro that usually heats up small cakes, not tensions between billion-dollar corporations. 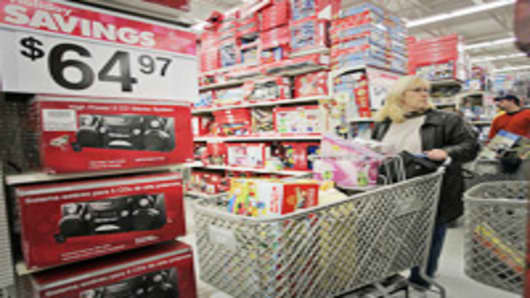 “It’s not about the prices of books and movies anymore. There is a bigger battle being fought,” said Fiona Dias, executive vice president at GSI Commerce, which manages the Web sites of large retailers. “The price-sniping by Wal-Mart is part of a greater strategic plan. They are just not going to cede their business to Amazon.”

Retailers are already fighting for every dollar consumers spend this holiday season. Sales are not expected to drop as much as they did last season, but the National Retail Federation, an industry group, predicts that they will decline 1 percent, to $437.6 billion.

Of course, Wal-Mart and Amazon are fundamentally different companies, and for now, at least, Amazon poses little immediate threat to the behemoth from Bentonville, Ark.

Wal-Mart, with $405 billion in sales last year, dominates by offering affordable prices to Middle America in its 4,000 stores. Amazon is a relative schooner to Wal-Mart’s ocean liner, with $20 billion in sales, mostly from affluent urbanites who would rather click with their mouse than push around a cart.

This fight, then, is all about the future. Rapid expansion by each company, as well as profound shifts in the high-tech landscape, now make direct confrontation inevitable. Though online shopping accounts for only around 4 percent of retail sales, that percentage is growing quickly. E-commerce did not suffer as deeply as regular retailing during the economic malaise, and it is recovering faster than in-store shopping. People are also shopping on smartphones and from their HDTVs.

Amazon, based in Seattle, has harnessed all of these trends, and is also behaving more like a traditional retailer. This fall it expanded its white-labeling program, slapping the Amazon brand onto audio and video cables and other products, and introduced same-day shipping in seven cities, trying to replicate the instant gratification of offline shopping.

For rivals both real and putative, Amazon is expanding its slice of the retail pie at what must be an alarming rate. In the third quarter of this year, regular retail sales dipped by about 4 percent and e-commerce over all was flat. But Amazon sales shot up 24 percent, sending its shares soaring.

More important for Wal-Mart, sales in Amazon’s electronics and general merchandise business — which competes directly with much of the selection in Wal-Mart stores — were up 44 percent. Wal-Mart does not break out Web sales, but it has been reported that its online business produces revenue of several billion dollars.

“If you are Wal-Mart, you want to have your proportional piece of this change in consumer behavior,” said Scot Wingo, chief executive of ChannelAdvisor, which helps retailers sell online. “You can even paint a scenario where e-commerce one day is 15 percent of all shopping, and that could really start to erode Wal-Mart’s offline business.”

That is why many analysts are unsurprised that Wal-Mart executives have placed Amazon squarely in their sights, with public throw-downs in interviews and pointed discounting.

It began last month with what appeared to be a public-relations-oriented competition on book prices, with both companies (along with Target, based in Minneapolis) dropping prices on books like “Under the Dome,” by Stephen King, to below $9.

The companies then began jousting over the prices of DVDs. Less visibly, there were isolated skirmishes, some of which also lowered prices in Wal-Mart’s stores. Wal-Mart offered a $15 gift card with a purchase of the new video game Call of Duty: Modern Warfare 2 — and Amazon matched soon after.

Wal-Mart and Amazon then both offered the Xbox 360 gaming console for $199 — with a $100 gift card thrown in. Last week, they both began offering the new Palm Pixi phone for around $30 — nearly $175 off the suggested retail price.

“We’ve grown up in a supercompetitive environment where customers can check prices with one click, and we like it that way,” said Craig Berman, an Amazon spokesman.

But rhetoric from Wal-Mart itself has stoked the flames of rivalry. In an interview last week, Raul Vazquez, the president and chief executive of Walmart.com, asserted that the site was growing faster than Amazon’s; suggested that Amazon Prime, a two-day-shipping service that costs $80 a year, was too expensive; and said that it was “only a matter of time” before Wal-Mart dominated Web shopping.

“Our company is based on low prices,” Mr. Vazquez said, laying down a challenge. “Even in books, we kept going until we were the low-price leader. And we will do that in every category if we need to.”

Friction between the two companies is not entirely new. In the late 1990s, Amazon assembled at least some of its knowledge of retail supply chains by hiring away Wal-Mart employees. Wal-Mart sued, and the two companies settled privately.

In a battle over prices, Wal-Mart is on more familiar turf. With its unmatched size, Wal-Mart has more leverage than anyone to negotiate better terms with suppliers. Offering the lowest price “is in our DNA,” Mr. Vazquez said.

Among Amazon’s advantages are a sophisticated distribution network built specifically for Web shopping, the thousands of outside sellers who offer products on Amazon.com, and a recognizable online brand. Amazon’s customers also do not pay sales tax in most states, a crucial advantage that companies like Wal-Mart, and their lobbyists, are trying to eliminate.

Jeffrey P. Bezos, Amazon’s chief executive, is fond of saying that retailing is a big market with room for many winners. But for Ms. Dias, from GSI Commerce, Wal-Mart’s campaign against Amazon is overdue. As an executive at the now-defunct Circuit City chain, and as an adviser to traditional retailers today, she says she has watched many companies overlook the long-term threat posed by Amazon.

“We have to put our foot down and refuse to let them grow more powerful,” she said. “I applaud Wal-Mart. It’s about time multichannel retailers stood up and refused to let their business go away.”