Gambling Drunk, Texting to Live And America's On Sale - Your Emails

Last night I shopped for Thanksgiving at Vons, owned by Safeway , and bought everything, including a 14-pound turkey, for the lowest price I've ever paid: $32. The turkey was already pretty cheap at $14, but to get it down to $5, all the other groceries had to add up to at least $25. I was six dollars shy. 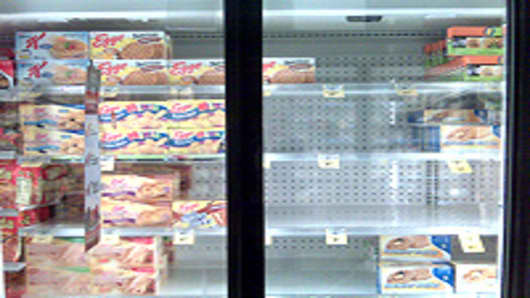 So I ran over to the freezer section to see if I could grab any Eggos. As I earlier reported, Kellogg is in the midst of an Eggo shortage.

You can see by the picture I took that shelves at Vons were mostly empty.

People have actually started selling Eggos on Ebay. One person is asking $400. I love Eggos, but I'm not gonna leggo my wallet for that.

I couldn't get any of the Homestyle Eggos my son likes, so I grabbed the last large "family-sized" box of Nutrigrain Eggos.

That, plus a pack of gum, brought my groceries to $25, and then the turkey was another $5.

I could not find any pumpkin pie filling at Vons. 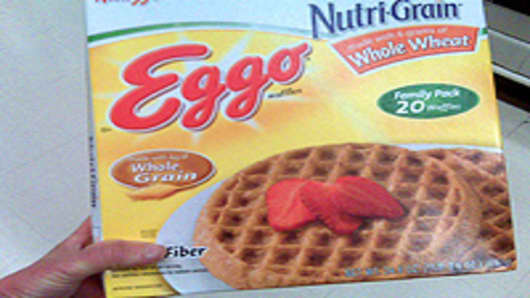 Oh, but I'm not cooking-I just bought all this food for a news story. I'll take it to the pantry at church. My sister-in-law, Monique, is cooking this year. Everyone agrees it's better that way.

I got a few emails about the blog on Terry Watanabe's lawsuit against Harrah's, where he says he lost over $100 million gambling while incapacitated by alcohol and painkillers, as Harrah's presses charges that Watanabe passed off nearly $15 million in bad checks.

From SB: "In addition to seeking treatment for his alcohol and drug issues, Watanabe should seek help with his ADD (Accountability Deficit Disorder). Is he serious?"

From Perk: "The defense will have to go to the 'eye in the sky' to get video of the incoherent gambler."

Paul S: "I would put this claim in the same category as those where the robber sues for his injuries incurred during a robbery...A fool and his money are soon parted."

Jason J: "Just wondering - after the first 2 or 3 million in bad checks don't you stop him from writing checks? Why wait until 14 plus million? Seems a bit excessive. BTW - couldn't he also take Harrahs to court for not providing booze and drugs to him. That is SOP for Vegas, right?"

About the blog on how texting can save your lifeby sending you reminders to put on sunscreen, John W. writes: "Assume the group receiving text messages was so overloaded with text messages on 44% of the days that they never got off the couch to go outside. If they used sunscreen the other 56% of the days, that would be 100% protection."

From JJ: "Can I get a text message to tell me if my beer is cold? Oh wait, I have a can that does that. Worst invention ever..."

I wrote a piece for the Consumer Nation blog about people hunting for bargainsin tough economic times.

Mike R: "Patience everyone! By next year there will probably be some sort of government assistance available to help us with our Holiday shopping needs."

Hugo: "Horrible article! A family living off other people and churches??? I don't feel sorry for them." (note from Jane: this is usually how ministers and missionaries pay their bills.)

A lot of reaction to my blog about low prices while traveling to New York, as well as problems in California.

From Larry M: "I have been trying for some time to convince anyone who will listen that what we MUST HAVE is BALANCED TRADE. With China, and others. I believe it's fair to say that no great country, with a robust backbone of Colleges and Universities, has ever been built on a foundation of a Service Economy. It takes an Industrial based Economy!

"However, with our enormous Trade Deficits, we have been de-industrializing America for 4 decades now!...We must have BALANCED TRADE POLICIES!!! Not 'Free Trade' policies! We MUST tell the Chinese that they MUST BUY more American goods, or we WILL impose tariffs to BALANCE THIS TRADE DEFICIT! It's in the Chinese best interest to BALANCE OUR TRADE with them. Why? Because, without a BALANCED TRADE POLICY, the American dollar will continue to sink visa all currencies. The American Economy will continue to languish in recession (or worse), and ultimately Americans WILL NOT repay it's debts to the Chinese with anything of value. Is that what the Chinese want? Surely not!..."

Stephen P.: "Thanks to China, our 51st state we, are now a nation of low wage earners.

Dave S. is a "lifetime Californian": "I'm lucky enough to live in beautiful Santa Monica, but I'm really starting to wonder if living in sunny California is worth it these days.

--So then I drove my Silverado to Petco to buy dog food and looked at the receipt that stated a sales tax of 9.75%!! I thought it was recently raised to 9.25%, but apparently the state officials were able to sneak in an extra 1/2 percent bump?

--After getting my dog food, I drive home and pass a gas station selling 87 octane gas for $3.49/gallon and turn on the news and hear that California has decided to withhold an additional $4 per week from everyone's paycheck. And I thought we already had one of the highest income tax rates in the country?

--So the next day I take my wife and dog up to Will Rogers State Park and read a sign about how the State might need to close down the park due to lack of funding. Additionally the notice states that visitors are no longer allowed to put blankets down on the grass.

--I get home from the park and watch my alma mater, the University of California, get shellacked in its football game, and start talking with my friend about how the tuition has more than doubled since I graduated in 1998.

Seriously, what is going on out here???"

Finally, in response to all the news stories about Lloyd Blankfein and the bonuses at Goldman, I received a letter from Fake Lloyd Blankfein. Here's part of it:

"I am sure you have heard the moaning this year about the increase in my package size. Yes, it is much bigger than last year. There is no need to have package envy. You all benefit from all the hard work I have put into this company even if you have not been touched by my package. Please, let me explain.

"I want everyone to be happy. The general public may not understand how our package, as a whole, contributes to the satisfaction of the entire world. The larger it's size, the happier we are, and we can then spread our happiness around infecting everyone. I have been known to work all through the night just to get my package size up and it is all for your satisfaction, not just my own.

"I have been misunderstood lately and ridiculed without end by the news media and general public because of my large package. I can take it.

Whatever you have to give, I can take. I know that my package and the total package of my company, is larger than yours and that is a good thing. I don't need to buy a sports car to compensate. I know my power comes from within. Our pleasure is contagious and we want you to be a part if it. We want you to catch the enthusiasm. You may feel like our packages are being shoved down your throats without your consent. But I am here to tell you; it's not going to hurt you in the end. You will like it. It might take some getting used to after so many people lost their packages, but someone has to do it..."