A week's worth of economic reports has been crunched into just three days this week, and Wednesday has its share of significant data. 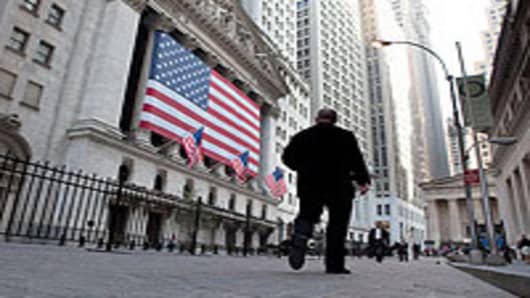 Weekly jobless claims are expected at 8:30 a.m., along with October durable goods, personal income, and consumer spending. Consumer sentiment is released at 9:55 a.m. and new home sales are released at 10 a.m. Jobless claims could be below 500,000 for the first time in months.

Stocks finished slightly lower Tuesday, after shaking off a triple digit Dow loss. The Dow was down 17 at 10,433, and the S&P 500 was down less than a point at 1106. The worst performers were the financials, with names like J.P. Morgan , Wells Fargo , Goldman Sachs , and Citigroup all lower. Financials were 0.8 percent lower followed by techs, off 0.5 percent. Top performers were defensive sectors -- consumer staples, up 1 percent, and health care, up 0.8 percent.

Two important earnings - Deere and Tiffany are expected before the opening bell. J. Crew's after the bell earnings Tuesday could add some pop to the retail sector Wednesday. J.Crew stock was higher after reporting third quarter profits more than doubled. J.Crew said net income rose to $43.9 million. However Coldwater Creek saw a wider loss and its stock fell.

There is also the last of three major note auctions this week at 1 p.m. Wednesday. A total $32 billion of 7-year notes will be auctioned. Treasury prices moved higher Tuesday after a record issue of $42 billion in 5-year notes drew strong demand. Other news supporting bonds was the downward revision in third quarter GDP to 2.8 percent from growth of 3.5 percent and news from he FDIC that the number of distressed banks was at hits highest level in 16 years.

At the same time, the S&P Case-Shiller home price indexes showed a fifth month of gains in home prices, though less than expected, but monthly consumer sentiment was better than expected. In an afternoon release, the Fed's minutes from its Nov. 4 meeting also showed the Fed sees a slow economic recovery, paired with high unemployment, the ingredients for a period of low rates. The Fed, however, also increased its growth estimate for the economy for 2010.

Cantor Fitzgerald Treasury Strategist George Goncalves said he believes the strong showing at Tuesday's 5-year auction may be a signal about how some investors view the dollar, which has been moving toward its 2008 lows. "It's a vote of confidence in the U.S. dollar and it's a vote of confidence on the US. Treasury market, which is a building block of U.S. debt," he said.

Traders have been warily watching the flight of money into the Treasury market which has taken yields on short term bills to zero and even negative in recent trading sessions, and has caused a flurry of buying in shorter duration notes. On Tuesday, the 2-year notes was yielding 0.74 percent. Five year notes were yielding 2.10 percent, and the 10-year yield was 3.32 percent.

Monday's 2-year auction was also well bid. "If you're willing to to own a Treasury at this low yield level, it's not just because of the collateral levels, and it's not just window dressing. There's some thing else going on. People are going to own low-yielding Treasurys because the dollar trade has run its course," he said.

"The '09 trade was to be short dollars and long everything that moved. 2010 doesn't necessarily call for a repeat of that as well," he said.

T. Rowe Price held its annual outlook day for media. Chairman and CIO Brian Rogers commented on a few trends he expects to see in equities in 2010.

Rogers expects companies to raise dividends, or reinstate them, a positive trend for the market. He also to see an increasing "zeal to deal" among companies, looking for strategic merger partners. "It will be an underpinning for equities," he said.

"I think markets will be generally good next year. I think it will be easier for stocks to outperform bonds," he said. Good earnings will be a catalyst, he said.