Where Do Pardoned Turkeys Go?

Courage, the turkey spared from ending up on a Thanksgiving table by President Barack Obama, must be the happiest turkey on earth. So it’s only fitting that he'll live out the rest of his life at one of the happiest places on earth: Disneyland. 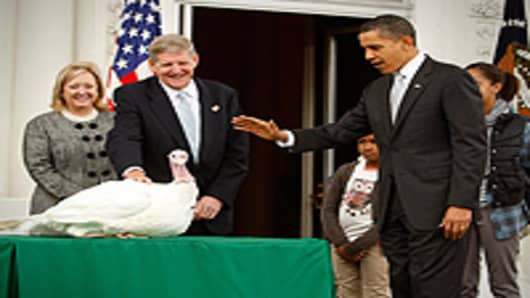 Getty Images
U.S. President Barack Obama pardons a turkey named 'Courage' as daughter Sasha (2nd R) looks on during an event to pardon the 20-week-old and 45-pound turkey at the North Portico of the White House.

"I am pleased to announce that, thanks to the interventions of Malia and Sasha—because I was planning to eat this sucker—Courage will also be spared this terrible and delicious fate. Later today, he'll head to Disneyland," Obama said as he pardoned the turkey.

Turkeys pardoned by the sitting president used to go to a turkey farm. But since 2005, they've been sent to a Walt Disney theme park — either Disneyland in California or Disney World in Florida.

Courage’s new home will be the Big Thunder Ranch, an outdoor petting zoo within the Disneyland park in Anaheim.

Turkeys raised for consumption generally live about 18 to 20 weeks, according to turkey farmers. Pardoned turkeys live a bit longer. The ones sent to Disney theme parks typically live about a year, a Disneyland spokesperson said.

The turkeys, which were plumped up for consumption, are put on a strict diet high in fiber as soon as they arrive at the park.

Before Courage retires to the Big Thunder Ranch, he’ll have to work one more day: He’ll be the grand marshal at Disneyland’s Thanksgiving Day Parade. And if he can't fulfill his duties, he's got a stand-in: Carolina, who was also pardoned, will be waiting in the wings. Later, she'll join him in Disneyland.

The national tradition of pardoning turkeys reached a milestone this year: Its 20th anniversary. George Bush Sr. began the tradition in 1989, his first Thanksgiving in office.