The Dow struggled but eked out a gain as trading volume hit a new record Friday. Techs rallied after strong earnings reports from Oracle and Research In Motion.

After the Dow hit a 14-month high on Monday, it was a steady descent from there — the Dow lost 1.3 percent for the week. The S&P shed 0.4 percent, while the Nasdaq gained 1 percent.

On this final "quadruple witching" day of 2009, with the simultaneous expirations of various options and futures contracts, the CBOE volatility index rose to nearly 22.

The combination of the "quadruple witching" and the shifting of companies in and out of the major indexes delivered not just the busiest trading day of the year, as many traders were predicting, but the busiest day ever for the New York Stock Exchange: 3.16 billion shares changed hands today, beating the prior record of 3 billion set in September 2008. Advancers outpaced decliners, roughly 3 to 2.

Earnings provided a positive spark: After the bell Thursday, BlackBerry maker Research In Motion and Oracle both beat consensus estimates, as did Nike.

But Palm shares tumbled more than 10 percent after the smartphone maker posted a loss that was worse than expectations as it faces increasing competition in the crowded field.

On the Dow, the bluechip index's modest gains were powered by Microsoft and Intel and Hewlett-Packard.

Techs were also hot on the S&P, with Oracle and Motorola near the top of the leader board.

Motorola shares gained over 5 percent as the company's proposed sale of its "home and networks mobility" unit has received several bids from private-equity firms.

Oil topped $74 a barrelafter an Iraqi official said Iranian troops briefly entered an Iraqi oilfield on Thursday and on the prospect of increased winter demand. Gold settled at $1,111.50 an ounce. 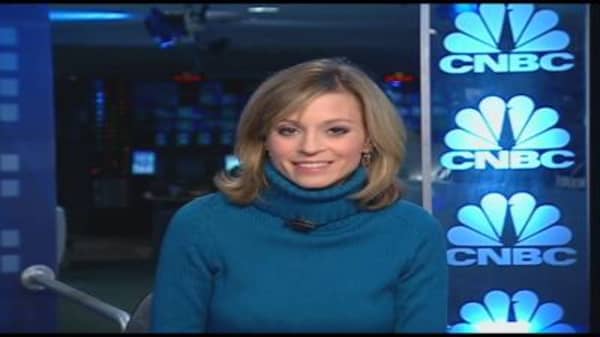 Click on the video at left for the week's top stories and what you need to have in your portfolio for 2010.

The dollar gainedagainst both the euro and yen but pared some of its gains in late trading. Still, the dollar logged its best week since April as investors piled into the currency before year end.

Videogame maker Take Two Interactive matched estimates with its latest earnings, but more notable was news that activist investor Carl Icahn has taken an 11.3 percent stake in the company, sending the shares up nearly 10 percent.

A Securities and Exchange Commission filing said Icahn may seek talks with Take Two, but it did not elaborate.

JPMorgan shares rose even as analyst Meredith Whitney slashed her fourth-quarter earnings forecast to 45 cents a share from 55 cents.

Financial stocks posted decent gains today but for the week, finished near the bottom of the pack.

IT, energy and consumer discretionary were the week's best performers. Telecom, consumer staples and financials were the worst.

In other action today, Visa rose more than 2 percent ahead of its addition to the S&P 500 after the closing bell today.

Boeing shares were the biggest drag on the Dow, down nearly 2 percent, as budget carrier Ryanair has halted discussions to purchase as many as 200 Boeing jets.

Jeweler Zale tumbled 17 percent after a report in the Wall Street Journal saying that the nation's second-biggest jewelry retailer has canceled some orders with suppliers as debt increases and sales decline.

On Tap for Next Week: