The Palm and Apple Plot Thickens 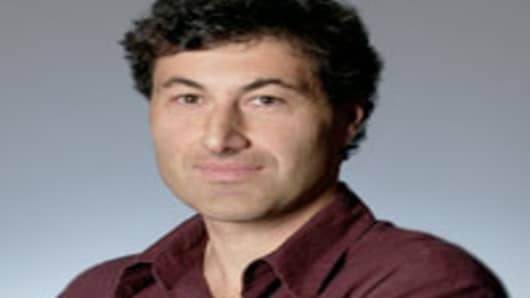 Today, another defection, and this one is significant.

Word from Elevation Partners is that Avadis (Avie to his friends) Tevanian has now joined as a managing partner. Significant, since for years, Tevanian served as Steve Jobs' right hand man when it came to software development, first at NeXT, then at Apple. And now, as the pitched battle for smart phone domination heats up even more, and Palm is trying to ride the wave of recent announcements with both Verizon and AT&T , the Tevanian arrival at Elevation could be game-changing.

Says Anderson in a prepared statement: "Avie and I worked closely together at Apple for many years and I have always admired his engineering talent and leadership, his strategic vision for how software can transform businesses and his ability to execute on that vision."

Said Tevanian: "Elevation Partners has put together an impressive investment team with the technological expertise and operational experience to identify future opportunities and implement change within existing businesses to seize those opportunities."

Tevanian spent 10 years at Apple as Chief Software Technology Officer where he led development of Apple's OS X, the heartbeat of Macs, and the key kernel of the iPhone and iPod Touch operating systems. He was also a member of the company's executive team that led Apple's turnaround, coming to the company after Steve Jobs engineered Apple's acquisition of Jobs' company NeXT.

It's yet another defection from Jobs' inner circle who all seem to be coalescing in competition against him. He joins Mike Bell, former SVP of product development doing the same thing at Palm; and Senior Apple Designer Jeff Zwerner, handling the same role at Palm as well. Rubinstein's departure was a bitter pill to swallow for Jobs' who desperately didn't want him to go to Palm. But now that he can rely on Anderson's and Tevanian's expertise through their association with Elevation cannot sit well with Jobs.

Further away from the spectrum, but not by far, an apparent rift between Jobs' and U2 frontman Bono developed to the point where the band's world tour was exclusively sponsored not by Apple, but by rival Research In Motion . And that was only a few years after Bono and Jobs' appeared on stage together at a memorable Silicon Valley event unveiling the next versions of iPods, including a specially branded U2 model. For the band's tour to be sponsored by RIM seemed to be an unusual shot against Apple broadly and Jobs personally. And don't forget, Bono is an investor in Elevation.

Meantime, Tevanian's move to Elevation is another coup for the Palm camp. But this company still has a long, long, long ways to go to justify the hype surrounding its WebOS devices including the Pre.

No word from Apple on any of this, which stands to reason, since Tevanian left Apple in 2006.