Double-Dip Recession Fears Creep Back Into the Market

A miserable week of economic news has rekindled a big question in the market: Is the economy headed for a double-dip recession? 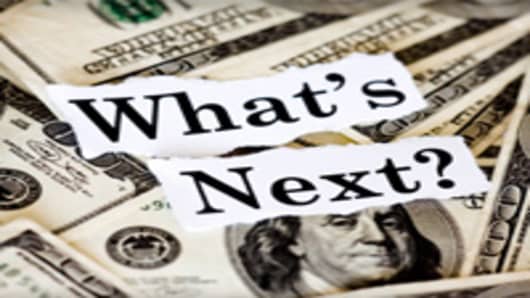 Those numbers followed reports earlier this week of a plunge in consumer confidence and the even more closely watched home sales, as well as a report from the Federal Deposit Insurance Corp showing bank lending at its lowest levels in nearly 70 years.

"These numbers are not stabilizing," says Kathy Boyle, president of Chapin Hill Advisors in New York. "We're two-thirds of the way through the first quarter and the jobs numbers are worse...I just look at all the signs of these things and I don't see us getting out of this."

It was just weeks ago that analysts were forecasting positive job growth any day now and were touting the 5.7 percent fourth-quarter GDP as evidence that the economy had shaken off recession and was reopened for business.

True to form, investors took the dour economic signs fairly well earlier in the week. But they had finally had enough of the bad news Thursday, sending the major averages down as much as 1.5 percent.

Boyle, who has held a bearish market position since the initial downturn in 2007, thinks things could get worse.

"The news this week should push the market further down than it is," she says. "The fact that we're not down 200 points means there's still buying interest out there."

The economic reports helping to bring the markets down primarily reflect the difficulties in the US, but investors clearly are growing more concerned with events happening around the world.

Ratings agencies startled the market Thursday morning by warning of a possible downgrade in Greek's debt. Moody's specifically mentioned the possibility of a double-dip recession as something that would cause a rating cut, which would be sure to have worldwide ramifications.

In remarks to Congress this week, Federal Reserve Chairman Ben Bernanke has sought to assuage fears and assure investors that the central bank would keep interest rates low for an extended period of time.

But in some quarters the chairman's comments also reflected concern of slow economic movement and the need to rein in the US dollar until real growth resumes.

"His fear is that the surging greenback will attenuate the demand for US exports and stall the recovery in manufacturing ..." Michael Pento, chief economist for Global Delta Advisors, wrote in an analysis. "Renewed weakness in the real estate sector and in the labor market along with a slowdown in global output should not only keep the Fed on hold in 2010 but also cause domestic GDP to stumble in Q3 and Q4."

Pento has been predicting a double-dip for months due in part to overly accommodative moves by global central banks.

"My prediction of a double-dip recession in late 2010 and early 2011 unfortunately looks on target and is underwritten by the troubles in Europe, Japan and the efforts on the part of the (People's Bank of China) to curb bank lending," he wrote.

Indeed, the US economic prospects seem as dire as the weather with yet another blizzard overwhelming the East Coast.

In fact, it could just be the awful weather that has stymied growth and is triggering some of the double-dip fears.

"The last six weeks or so have been a little different for most consumers. Nobody's going to work because they can't get out of the snow," says Kurt Karl, chief economist at Swiss Re in New York. "We have to get to spring before we get really confident as a public about the economy."

While jobs seem to be at the heart of the concerns, growth will be difficult without bank activity as well.

Noted analyst Meredith Whitney caused a stir on CNBC recently when she forecast difficult times ahead for banks because of loan portfolios that would shrink as much as 20 percent.

The FDIC numbers backed up that assertion at least inasmuch as lending continues to be anemic.

And lack of access to credit also erodes consumer confidence.

"It is disconcerting at the very least if not a bit of an eye-opener," Karl says. "Lending from banks has got to be happening soon to sustain growth."

In the face of such a scenario investors face tough choices of putting money into a stock market that has been going sideways for three months now or risk missing out on another leg up.

"We for quite a long time have been coining an adage: 'Hedge the cyclical and fund the secular,' " says John Stoltzfus, strategist at Ticonderoga Securities in New York. "Near-term there is significant uncertainty that can cause more than speed bumps but considerable choppiness in the economic recovery. More cyclical issues are worth holding onto and even adding to in the pullbacks to gain exposure to the secular story."

Such caution will be necessary until policy makers can help steer the economy toward recovery, particularly in jobs, Stoltzfus says.

"This is the kind of environment where if nothing is done we could get a double dip out of this," he says. "If Washington can cease with the political jawboning and rhetorical barbs and both sides of the table work together we can't but think something can be worked out."