Calorie Data to Be Posted at Most Chains

Buried deep in the health care legislation that President Obama signed on Tuesday is a new requirement that will affect any American who walks into a McDonald’s, Starbucks or Burger King. Every big restaurant chain in the nation will now be required to put calorie information on their menus and drive-through signs.

In other words, as soon as 2011 it will be impossible to chomp down on a Big Mac without knowing that it contains over 500 calories, more than a quarter of the Agriculture Department’s 2,000-calorie daily guideline. 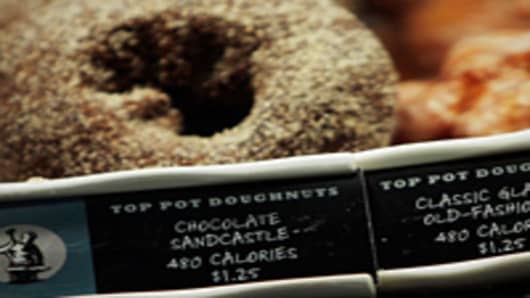 The legislation also requires labels on food items in vending machines, meaning that anybody tempted by a king-size Snickers bar will know up front that it packs 440 calories.

The measure is intended to create a national policy modeled on a requirement that has already taken effect in New York City and was to go into effect in 2011 in places like California and Oregon. The new federal law requires restaurant chains with 20 or more outlets to disclose calorie counts on their food items and supply information on how many calories a healthy person should eat in a day.

“I think it is an historic development,” said Kelly D. Brownell, director of the Rudd Center for Food Policy and Obesity at Yale. Consumers spend more than half their food dollars outside of the home, he said, “and when people eat away from home they eat more and they eat worse. And part of the reason may be because they don’t know what’s in fast foods, and they’re often shocked to find out.”

While Mr. Brownell acknowledged that some consumers will ignore the nutritional information, he said labeling would affect the decisions of enough people to create a public health benefit.

“The broader issue is that this firmly establishes the government’s role in improving the nation’s nutrition,” he said.

The measure was approved by Congress with little public discussion, in part because restaurant chains supported it. They had spent years fighting such requirements, but they were slowly losing the battle. Confronting a potential patchwork of conflicting requirements adopted by states and cities, they finally asked Congress to create a single national standard.

“We have been strong advocates and supporters in trying to ensure this provision became law, and are extremely pleased that it was signed into law today,” Sue Hensley, a spokeswoman for the National Restaurant Association, said on Tuesday. “The association and the industry were supportive because consumers will see the same types of information in more than 200,000 restaurant locations across the country.”

Exactly when consumers will see that information is unclear, however. The legislation requires the Food and Drug Administration to propose specific regulations no later than a year from now, but completing the rules could take longer. If a legal battle ensues, as often happens with new federal regulations, the effective date could conceivably be years away.

Passage of the measure provoked aggravation among some free-enterprise groups, who saw it as another unnecessary government intrusion into private decision-making. Critics of the new law also contend that there is little evidence to show that menu labeling leads people to eat better.

“Frankly, it seems to me that whether I’m buying an apple or a Big Mac from McDonald’s , if they want to sell it to me without any information, I have a perfect right to buy it,” said Sam Kazman, general counsel for the Competitive Enterprise Institute, a free-market advocacy group. “This simply is not a federal issue.”

More than a dozen states have been considering labeling measures or have already passed them, though many have not yet taken effect. The new legislation overrides many existing laws, though some localities will be able to continue enforcing rules that are more stringent than the federal requirements. New York City, for instance, is expected to continue requiring chains with 15 or more outlets to post nutritional data, compared with the standard of 20 outlets in the federal law.

Supporters of the legislation say that even if menu labeling does not inspire consumers to eat better, they should be told what they are putting in their mouths.

“You don’t need a study that proves anything,” Mr. Brownell said. “You just have a right to know.”

Mr. Kazman said that consumers who want that information could look it up on the Internet. And he added that he was concerned that if Americans did not slim down as a result of menu labeling, the government might require restaurants to take further action.

“They’ll decide the font’s not big enough or the words are not scary enough and they’ll push for more,” he said. “I don’t think this is taking us down a very appetizing course.”