Better news on manufacturing surveys in China, as well as a decent reading on Japan's Q1 Tankan report, helped the Asian markets overnight. Europe also up about 1 percent. 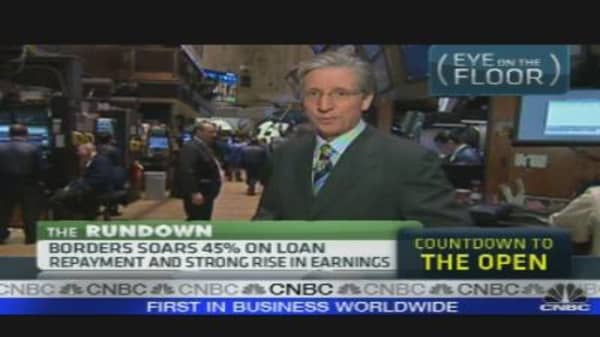 Futures moved up a few points as jobless claims came in about in line with expectations, and although job losses have largely ceased since November there remains little evidence, based on continuing claims, that firms are adding to their payrolls.

(Check the ticker when it's live: )

This, in addition to selling 17.2 million shares to Warburg Pincus, which also has a right to purchase an additional $100 million at the public offering price.

I have a First on CNBC interview with the co-CEOs of Primerica, Rick Williams and John Addision, at 9:45am ET.

3) Micron is up 6 percent after Q4 earnings soared above Street expectations ($0.39 vs. $0.24 consensus). The strong earnings was a result of a jump in DRAM memory volumes (up 17 percent) and prices (up 7 percent) as well as significantly higher margins.

4) Borders Group soars 45 percent to $2.50 after Reuters reported the firm has repaid a $42.5 million loan from Pershing Square Capital Management. The loan, which was extended three times, was used to help fund store renovations and technology upgrades.

Additionally, the bookstore company reported earnings that doubled from a year ago as a result of smaller writedowns. However, sales still were weak, with comps falling 14 percent in the quarter at its Borders chain.