Did You Notice This New Market Move?

The market recently has followed a regular pattern, Cramer said Thursday, largely because of the continued worry over Greek debt. It’s become so predictable, in fact, that investors might be able to trade it. 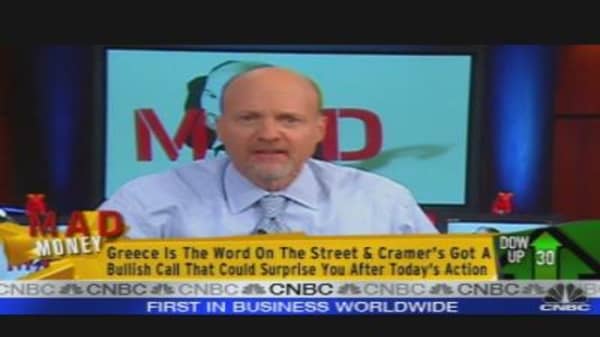 Only the most sophisticated players can jump from pounds to dollars and yen to euros, but Greece’s bonds have weighed heavily on stocks at the opening bell. Any number of companies that should have ramped as soon as trading began have languished instead. But then by midmorning, when Europe’s markets close, the Street turns its attention to Stateside fundamentals and American equities tend to rebound.

Also playing a part here, too, is a general sense of ennui among investors, Cramer said. They don’t seem to react, at least initially, to any good news at all. Whether they consider the news routine or they’re just bored, he’s not sure. But he knows there are plenty of stocks that should shoot higher but don’t, because it seems investors just don’t care. Case in point: Some incredibly strong monthly same-store sales numbers ever reported were released today, but the market barely shrugged at the related stocks.

Put these two factors together, though, and you’re left with great bargains on some very attractive merchandise. Investors right now can pick up stocks benefiting from good news early in the day, before it’s priced in, and then watch their share prices rise in the afternoon. Cramer found seven companies in which this pattern is playing out, and they all seemed to say the same thing: Take advantage of that post-opening bell pause.

Bed Beth & Beyond reported a tremendous earnings beat last night, delivering 86 cents a share versus the 73 cents the Street expected. And this from a housewares company during what is supposed to be a terrible environment for housing. Still, though, BBBY actually opened down a few pennies at $44 and change, but later jumped to $46.20 an hour later.

Also, TJX Cos. raised its guidance even after reporting a 12% increase in March same-store sales. What happened then? The stock first opened flat, but an hour later moved up to $45.50.

And UBS yesterday boosted its price target on Wynn Resorts' Macau division. Sure enough, the stock opened down at $81 but then rebounded to $85 once Europe closed and Greece was off the radar for the day.

This list goes on: EOG Resources , Goldman Sachs , Ross Stores and Target all have behaved the same way. Ross this morning even raised its earnings guidance to between $1.14 and $1.16 from between 92 cents and 95 cents, but still the stock opened almost exactly where it closed yesterday, only to rally $1.50 later on.

What’s the takeaway here? None of these companies has anything to do with Greece – not even Goldman Sachs – but they’re still affected by the country’s debt woes. As long as that’s happening, Cramer said, you have a good chance to buy them at a discount.