Optimism prevailed on Wall Street Wednesday with the S&P finally breaking above the psychologically important 1,200 level.

Stronger than expected earnings from Intel and CSX powered the rally, however it’s the results from JPMorgan that may present the best trading opportunities.

How should you be positioned now? 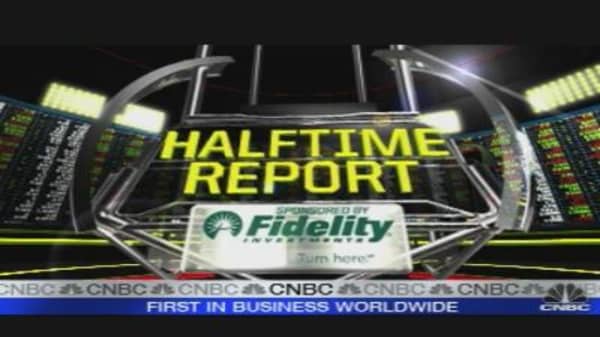 I also think Citi trades higher as they shed assets, says Anthony Scaramucci of Skybridge. As they get back to their core they’ll get back to a better risk management profile and long term profitability.

(*In the interest of full disclosure, Skybridge inked a deal to purchase assets from Citi. More on that below.)

Considering the positive things they’ve had to say about loan loss reserves, if you’re a risk taker look at a long position in Fannie and Freddie , counsels Brian Kelly of Kanundrum.

There is no way I’d get long Fannie and Freddie, counters Patty Edwards of Store house. There are far too many unknowns.

In the space I agree with Joe’s trade; I think the play is to buy a $4 call in Citi, says Jared Levy of Peak6. And if you’re looking to play BofA I’d look at the 20-18 collar in May, he counsels. That way you participate on the upside but limit the downside.

They say history repeats itself. If that’s the case you might think about shorting Intel because this stock does not have a good track record of holding on to gains post earnings. Take a look:

Will this time be different?

I do think this time is different, says Joe Terranova. It seems to me the Street is underestimating the sector’s growth potential. But I think the better trade off Intel is long rivals Marvel, Teradyne and Lam Research.

Shares of Baidu rallied sharply on Tuesday hitting a new all time high. The move is particularly noteworthy because Baidu made these gains ahead of Google's earnings release Thursday afternoon.

I’m bullish Google, says Brian Kelly. I think Google story is a much bigger global story. Baidu at over 100 times earnings is a little rich for me.

I think the trade is long Yahoo!, says Joe Terranova. As far as I can see it’s under-owned.

Fast food giant Yum! Brands reports earnings after the bell on Wednesday. According to estimates, the company should post earnings of 53-cents a share.

However, many investors will be more concerned with the company’s sales figures – especially those out of China.

A strong sales rebound would be a powerful sign that consumers are able to spend more on dining out -- even if it's just on value menu items.

In the space I’m much more bullish McDonalds, says Patty Edwards, and I like the dividends.

We’ve got the latest on a hot deal. As you may know, on Wednesday Skybridge Capital announced plans to buy a hedge fund business from Citigroup for $4.2 billion.

The deal marks another step in Citi's plan to shed assets. The unit had been languishing in Citi Holdings, the bank's repository for businesses that it is trying to sell or wind down.

”It was a fair deal for both parties and we’re very excited,” says Anthony Scaramucci of Skybridge Capital. “We think it’s a crown jewel and we’re excited to own it.”

What else must you know? Find out from Anthony Scaramucci of Skybridge Capital. Watch the video now.