Outlook: Market Selloff and 'Weakness' in Second Half

The market rally will last until about June—then, investors should brace for a selloff, said John Carter, president of Trade The Markets. What will be the catalyst? He shared his market outlook. 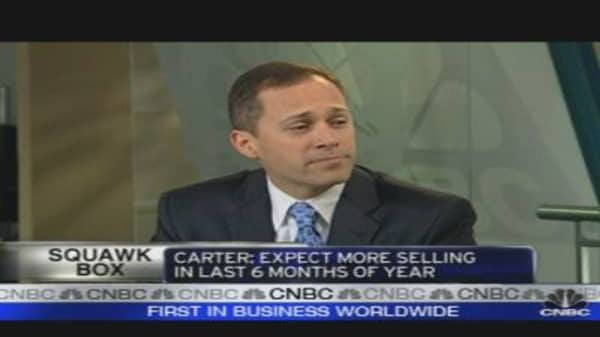 “The highest we’re going to get in the rally is 11,800 in the Dow and at that point, we’re going to see some churning and rolling over," Carter told CNBC.

Carter said the second-quarter GDP report will be the primary catalyst for the selloff.

“The reality of it is, all the foreclosures that are working their way in the system are no way near getting done, commercial real estate continues to fall, a lot of the GDP numbers we’ve seen are from car sales—[and] the Cash for Clunkers programs is gone,” he explained.

“So there’s a lot of false demand that was created in late 2009 and early 2010 from a lot of government programs.”

The economic news has to continue to get “exponentially better” for the markets to grind higher from this point, he said.

No immediate information was available for Carter or his firm.

*GE is the parent company of CNBC and CNBC.com.