With oil from a huge spill in the Gulf of Mexicobeginning to lap at the shores of coastal Louisiana Friday, crews are getting in place to assist wildlife caught in the wake of the oil-choked water. 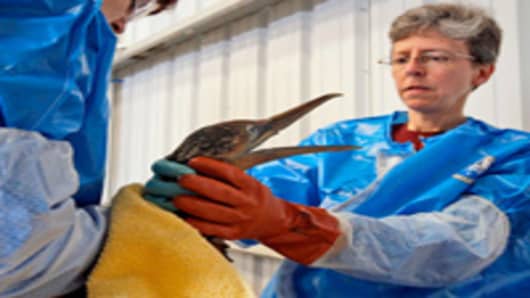 Scenes like this are familiar to Procter & Gamble, the maker of Dawn dish detergent, which is often used to clean oil residue from birds' oil-soaked feathers.

Dawn works because its designed to remove oily cooking grease from pots and pans without harming a person's hands.

Oil has been pouring from a leak in a blown out well in the Gulf, which was operated by BP, at the rate of as much as 25,000 barrels a day, according to The Wall Street Journal. In the coming days, the oil could reach Mississippi, Alabama, and northwestern Florida. Both Louisiana and Florida have declared states of emergency.

Rescue crews have already cleaned the first bird coated with oil, a young northern gannet. A bird that is normally white with a yellow head and long, pointed beak.

According to the Associated Press, workers with Tri-State Bird Rescue and Research, a Delaware group, used Dawn blue dishwashing soap to scrub the bird, which was found offshore, clean.

So far, it was the only animal being cleaned, but rescuers expect many more to come in throughout the day.

According to the International Bird Rescue Research Center, it can take about 45 minutes to wash oiled birds. Birds coated with oil lose the natural waterproofing their feathers provide. Without a waterproof coat, the birds can suffer from hypo or hyperthermia.

The birds also try to preen themselves to rid their feathers of oil. In doing so, they ingest the oil, which damages their internal organs. The focus on preening also often overrides other activities including feeding or evading predators.

Teams from the IBRRC have been sent to the Gulf Coastalready to help in the efforts.

According to P&G spokeswoman Baba, the company has been mobilizing to make sure that it can dispatch supplies of the detergent to the centers being set up to rescue the animals.

Since last July, Dawn has been raising money for conservation projects targeted at cleaning wildlife hurt by oil spills. As part of this effort, when consumer buy a bottle of Dawn, they can activate a dollar per bottle donation to the International Bird Rescue Research Center(IBRRC) and the Marine Mammal Center.

So far, P&G has raised $376,590 toward its goal of raising $500,000 for this cause. As part of the relaunch of its Facebook page, Dawn began re-airing a commercial promoting this effort earlier this month.

P&G donates Dawn detergent to the IBRRC and other organizations because it can remove much of the oil from the birds without irritating the birds' skin and eyes.