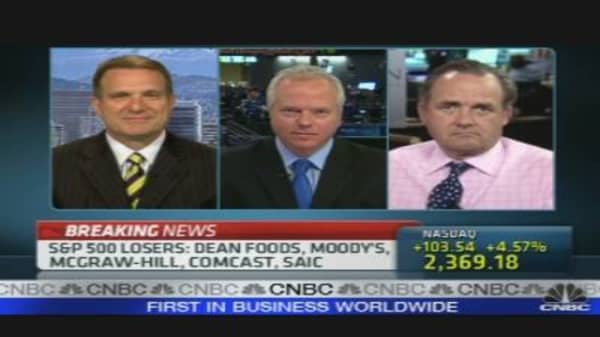 “The sovereign debt crisis is not over—it’s going to continue for many years—but I don’t think it will derail the global recovery,” Cook told CNBC.

“I’m definitely a buyer of the broad market and quality stocks on the pullbacks,” Cook advised. “We’re still in the early innings of a cyclical recovery.”

Meanwhile, Lekas said he is still worried about the sovereign debt crisis in Europe. He likened the $1 trillion emergency rescue package from the ECB to "feeding an alligator breadcrumbs."

The “real story” that investors should focus on is the Libor*, he said, as it's moved from 80 basis points to 110 in the last two months and is likely to rise further.

“That’s going to put a lot of pressure on the U.S. government to have to compete with that rate and will probably push the treasury rates higher.”

“This is a short-covering rally—you should be taking advantage of it—and the VIX is back in full force,” he warned.

In the meantime, O’Donoghue said investors should look into “very high quality” companies such as Philip Morris .

No immediate information was available for Cook, Lekas or O’Donoghue.

*GE is the parent company of CNBC and CNBC.com.