Hewlett-Packardbeat expectations on solid demand for personal computers and servers and a resurgence in its printing business, and the company raised its full-year outlook. 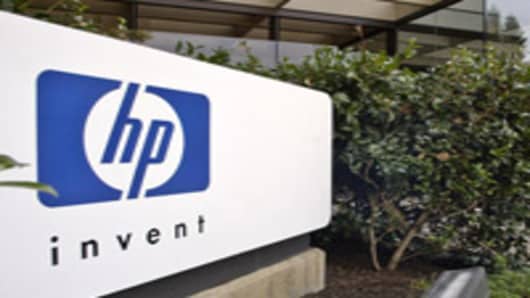 The world's leading maker of personal computers said it earned $1.09 a share excluding one-time items in the second quarter, up from 86 cents a share this time last year.

"It was just a good strong quarter, broad-based across regions, across all businesses, just quite strong," Mark Hurd, HP's chief executive officer, told CNBC. (See the full interview below.)

Analysts who follow HP saw it reporting a profit of $1.05 a share on sales of $29.815 billion, according to a consensus estimate compiled by Thomson Reuters.

HP now expects sales of between $29.7 billion and $30 billion during the same quarter. Analysts put HP's revenue at $29.72 billion.

Analysts say the world's largest technology company by sales is poised to ride an expected surge in enterprise tech spending in 2010, as businesses replace aged equipment.

It reported Tuesday an 8 percent jump in fiscal second-quarter revenue from its printing division, up from 4 percent growth in the fiscal first quarter. The division accounts for about one-fifth of revenue but a third of operating profit.

In late trading, HP shares reacted to the report by climbing more than 2.5 percent. Get after-hour quotes for Hewlett-Packard here. 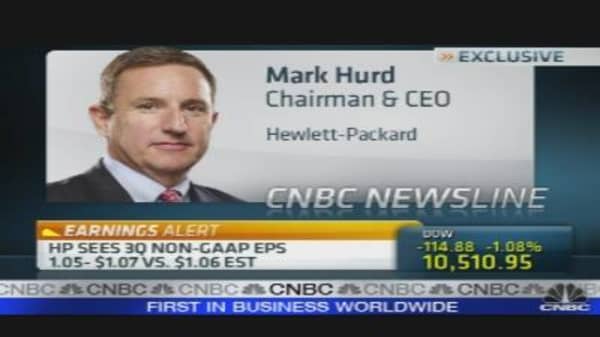 The stock, a component of the Dow Jones Industrial Average, finished the regular New York Stock Exchange session down about 1.5 percent at $46.78.

HP shares are down about 8 percent for the year. By contrast, shares of International Business Machines are about flat, and Dell shares have climbed about 6 percent over the same period.

HP, which is based in Palo Alto, Calif., said last month that it's buying smart-phone pioneer Palm for $1.4 billion in a bid to beef up HP's very small mobile phone business. HP's $2.7 billion acquisition of 3Com makes HP a stronger player in computer networking.

Robust consumer demand has helped buoy PC makers and their suppliers, even as they grapple with anemic corporate appetites for new PCs. HP's PC division posted a 21 percent revenue increase over last year.

Cathie Lesjak, HP's chief financial officer, said in an interview that HP saw an "uptick" in orders from smaller businesses and the financial services industry. But as previously predicted, Lesjak said, spending by large corporations "refreshing" their PC fleets will remain weak until the second half of this year.

"We're not calling for a really big uptick in corporate refresh at this point in time, but we're definitely seeing some signs there," she said.

HP is increasingly focused on its services business, which was beefed up with the $13.9 billion purchase of Electronic Data Systems in 2008. The services division is now one of HP's most profitable, alongside its cash-cow printer-ink business.

The ink business, however, is under pressure from generic ink makers with lower prices. Services, meanwhile, have largely proven resilient in the down economy, as companies look to outsourcers such as HP and IBM for ways to cut costs.

- AP and Reuters contributed to this report.