Current efforts to reform financial regulation are “cosmetic” and won’t prevent another crisis, economist Nouriel Roubini told an audience on Tuesday at the London School of Economics.

“The way I think about this crisis is not in terms of black swans (a sudden, rare event), but white swan events," Roubini said. "Crises are much more common than we think.” 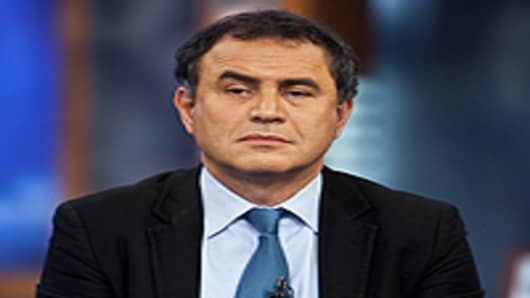 “We need more radical reforms," he added. "The idea that we’ll be able to close down an institution like Goldman (Sachs) in an orderly way—a business that operates in nearly a hundred countries—is absurd.”

Roubini, an NYU professor who has been called "Dr. Doom" for his dire economic outlook, said the three main problems with big banks like Goldman were that they were 1) Too big to fail, 2) Too big to be bailed out and 3) Too big to be risk managed.

“Experience has shown that ‘economies of scale’ achieved by the largest banks as a result of Glass-Steagall have been very small,” Roubini said. “The cost of being too big to fail has been much larger.”

He tiptoed around the question of whether the financial crisis is over.

“Maybe not,” Roubini said. “There is a risk of ending up in another crisis, as the world found itself in the Depression in 1933.”

The main problem is the huge amount of government debt in many countries around the world. “Debt ratios haven’t fallen yet," he said. "They’re just stabilizing at very high levels.”

He insisted that these deficits were indispensable, however.

“We were on the verge of a great depression," he said. "We needed the stimulus, or the outcome would have been ugly. Some countries can monetize fiscal deficits, others can’t.”

The world is now faced with a choice between default or inflation, according to Roubini.

“If the debt of governments becomes unsustainable, they won’t have the ability to prevent a deeper recession,” he said.

He stopped short of predicting a double-dip recession, but if the sovereign debt issue is not addressed, it could be, in his words, “a huge problem.”

A fiscal train wreck lies ahead whether governments remove deficits or maintain them, leaving a situation where policymakers are “damned if you do, damned if you don’t,” Roubini said.

The fact bailout packages are growing exponentially in size and scope is indicative of serious problems, according to Roubini. “They’re going to wake up in America within the next three years and say: ‘this is unsustainable.’”

“We had a Bear Stearns bailout of $40 billion; a Fannie and Freddie bailout of $200 billion; a TARP program worth $700 billion and now an EU bailout worth $1 trillion. So ‘trillion’ has become the new normal.”

He repeated his view that the Greek debt crisis was “just the tip of the iceburg,” and that the PIIGS (Portugal, Ireland, Italy, Greece, Spain) problems did not only revolve around excessive debt levels, but a lack of competitiveness and the sharp appreciation of the euro from 2006 - 2008.

“These economies were already losing market share to Asia,” where the costs of labor and manufacturing are significantly reduced compared to the Eurozone.

Roubini suggested three remedies to restore competitiveness in Western economies: deflation, structural reform and weakening of the euro. But he warned that the EU could break apart if not all countries adhere to the same fiscal discipline.