Yep, you heard that right. Dale Earnhardt Jr.’s name and signature is now on the packaging of cheeseburgers, wings, as well as pork and chicken sandwiches made by WOW! Foods. 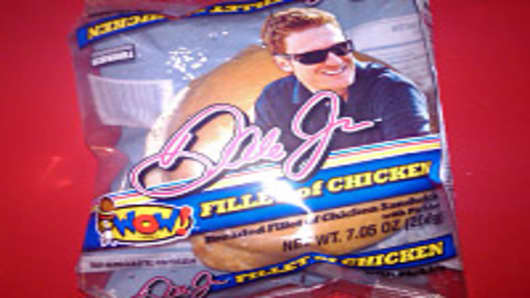 Because of Earnhardt’s mug and John Hancock, Richardson, who heads up sales and marketing for the company, says its products have gotten 100 percent penetration in vending machines across America.

“It has been unbelievable,” Richardson said. “We’re doing better than we expected. Because we have Dale Jr. everyone wants our products.”

With its product –- which is frozen by them, refrigerated by the vendor and microwaved by the customer –- in vending machines, the next market is convenience and club stores and gas station chains.

So why did NASCAR’s most marketable star agree to a deal with this fledging company? Richardson said it’s all about history.

The family behind WOW! used to own a company called Western Steer Mom and Pops. That company, which included a chain of 280 restaurants, sponsored Junior’s late father as well as Junior when he was just getting his start in the sport.

“He is responsible for the sales of 48 percent of NASCAR collectibles,” Richardson said. “Add his father and that’s 70 percent of the business.”

Asked whether he’d do a deal with any other NASCAR driver, Richardson replied, “I’d rather take Junior than all the other drivers combined.”

Richardson wouldn’t comment on how much of a royalty he’s paying Earnhardt, but said giving a percentage of a robust business is better than keeping it all and struggling.

“We can do math here in North Carolina too,” Richardson joked.

The company’s most successful product is the cheeseburger, which already has the mustard, ketchup and pickles on it. Most of the products retail for $2.75.