What America Is Up Against in the World Cup

The World Cup is big business 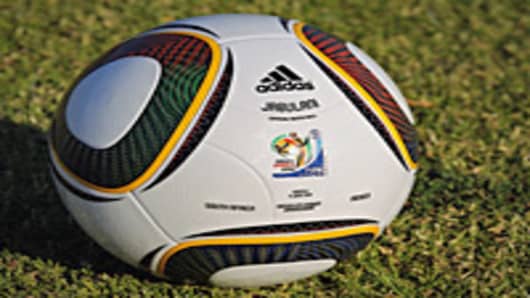 Getty Images
The match ball for the opening World Cup fixture between South Africa and Mexico.

... though not so much in America. Saturday, however, the U.S. men's soccer team takes on England, and I will watch! Ok, I promise to watch for at least ten minutes.

To prepare myself for the experience, I've been reading up on the event. I'm not researching the teams, though. I'm checking out the fans.

This could get ugly.

In The Times of London, Rod Liddle reminisces, tongue in cheek, about a bygone time when soccer was as much about hating as headers.

"I think it is this that I used to enjoy most about the World Cup—extreme drunken bigotry and xenophobia," Liddle writes in The Times. "We were, in this country, extraordinarily good at it, much better than we were at football; it was something which brought us together."

His parents often made references to a World War (I and/or II). "When we played the USSR, my mother informed me that everybody in that vast country had a television set, but instead of them watching it, it watched them." Not everyone was criticized. "Only one country escaped this blanket contempt, and that was Norway. Decent, honest people who give us a lovely Christmas tree every year." Decent? Honest? Dude, ever hear of the Vikings?

While rooting for the home team is more difficult these days, Liddle will still give it a go. "Right now, the only thing keeping me rooting for England is the knowledge that all of Scotland wants us to lose; that, and the ghost of a memory from childhood."

As for facing the U.S.: "What would my parents say about them, the Yanks? Arrogant, overweight, sloppy and stupid, if I remember rightly."

Yeah, but we have better teeth.