Hedge fund manager John Paulson, president of Paulson & Co, is famous for his negative view on the US housing market that turned into a huge money-maker for his fund. 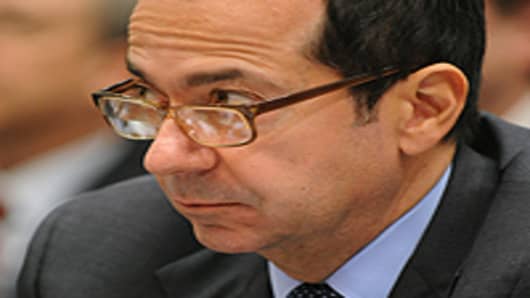 But Paulson refuted any suggested that his activities had any effect on the mortgage market, instead putting the responsibility on the shoulders of mortgage brokers.

He also said that the risk of a double-dip recession in the US is less than 10 percent.

"We had absolutely zero impact on the mortgage or credit crisis,” he told an audience at the London School of Economics on Wednesday.

“Instead, that guilt lies with the mortgage brokers themselves. They only cared about generating fees, they falsified appraisals... this was the sad underbelly of mortgage finance in the US."

Paulson was not only skeptical about the subprime mortgage market, he bet against it, earning between $3 billion and $4 billion for himself in 2007. “We do risk arbitrage, a strategy independent of markets going up or down,” he explained.

"Outside investors need alternatives to going long stocks or long bonds, which is where hedge funds come in."

His famous “big short,” was the subject of Gregory Zuckerman’s book “The Greatest Trade Ever: How John Paulson Bet Against the Markets and Made $20 Billion.” The trade drew criticism that Paulson was profiting from people who ultimately lost their homes.

But "(w)ithout us, the mortgage market would have existed exactly as it did," Paulson said.

“(Short-sellers) were a tiny portion of that market, maybe 2 - 3 percent," he added. "Remember, most people were desperate to buy subprime securities during those years.”

The Big Long? Not Yet

Paulson said he is optimistic on the American economy. "I think we're at the tail end of the credit crisis," he said "We're in the middle of a sustained recovery in the US. The risk of a double dip is less than 10 percent.” Europe, however, “is the one soft spot in the world," he said.

"It's the best time to buy a house in America. California has been a leading indicator for the housing market, and it turned positive seven months ago. I think we're about to turn a corner."

But his investments signal a more pessimistic view. Paulson’s firm is the largest holder of Gold exchange-traded funds in the world, as Paulson said he fears "currency instability and inflation due to the large amount of quantitative easing."

He denominates all of his assets in gold and is bearish on the dollar. “Within three-to-five years, we could see high single, if not double-digit rates of inflation,” he said.

Paulson said when he started his fund, he always looked for opportunities to short high-quality, but mispriced credit.

The problem with rating agencies, whom he met with to discuss their modelling techniques, (which he said bewildered him), in 2006-2007 "is that they are backward-looking. There's never been a period in the history of their statistical data when housing prices decreased. The agencies' models didn't take account of the possibility that housing assets could fall.”

When Paulson exposed this logistical hole to the agencies, their response was that they couldn't make up any data points or "hypothetical" scenarios where house prices fall because to make up this scenario would be to "speculate," he said. Moody's says it “doesn't speculate."

Paulson started his credit opportunities fund back in 2006. It's been ranked No. 1 in the world by Barrons, with assets under management compounding over 100 percent per year since its launch.

Paulson thinks credit default swaps are "useful tool," similar to options on bonds. He doesn't agree with banning naked CDSs, or that investors should be obliged to hold the underlying of any investment that they're using CDSs to trade.

"Why would I want to short a stock I'm long?" he asked.

Germany's decision to ban naked CDS trading, among other short-selling, is "an exaggeration," he said.

He said he agrees with the Volcker rule in principle, but believes people who invest in hedge funds or private equity shouldn't use leverage in order to do so.

Private equity is already very risky," he said. AIG was "a poster child for the extreme," with leverage of 100 to 1, Paulson said..

“They insured $500 billion worth of credit with only $5 billion of equity. Clearly that was out of control, and there is a need for regulation of derivatives."

US lawmakers agreed on Friday to allow banks to trade in-house many types of over-the-counter derivatives, watering down a controversial plan that would have required banks to spin off much of their lucrative swaps dealing desks.

The country with the most to lose with the new AIFA regulations is the UK, as about 80 percent of European hedge fund managers are based in London, according to Paulson.