Selling accelerated into the afternoon on Friday with financials and industrials leading the S&P 500 lower.

The sell-off was largely triggered by concerns that the odds of a double-dip recession may be increasing, after the latest jobs report showed the US lost 125,000 last month, the largest decline since October.

How should you position now?

Looking at new research from Bespoke, earnings revisions are in a clear downtrend, says Steve Grasso. I think companies are going to be hard pressed to show profits in the second half of 2010. There’s nothing to get buyers excited. Fundamentals are terrible and technical patterns are bearish.

As we first told you Thursday, the S&P is now on the verge of hitting something chart watchers call a death cross – a pattern created when the 200 day moving average crosses the 50-day; it’s another bearish signal.

Because of all these headwinds I expect the market to trend lower, says Steve Grasso.

I’m concerned we could see a terrible Tuesday, adds Joe Terranova. Over the holiday week-end many investors may reflect on the lack of positive catalysts in this market. That could send them to the sidelines and set us up for an ugly Tuesday; it could be a capitulation type of morning.

I agree with Joe, says Patty Edwards. And don't forget that although the US markets are closed Monday world markets will be open. It’s entirely possible negative headlines come out of the world markets on Monday; that too would trigger selling. 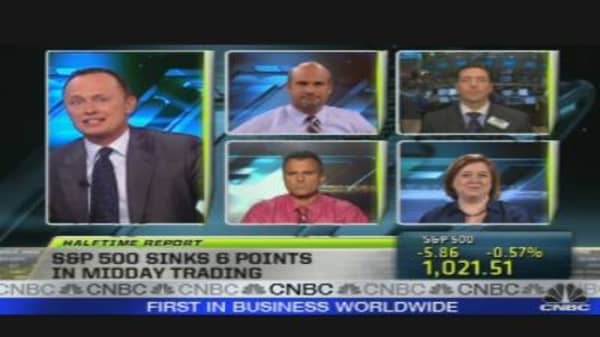 I think the trade is long Joy Global, says Joe Terranova. They provide the tools for mining.

I think the play is Caterpillar , says Pete Najarian. Not only because of the developments explained above, but CAT has also been forecasting all kinds of growth in China.

CURRENCIES STORY OF THE WEEK

The euro rose Friday to its highest level against the dollar since late May with greenback weakness largely stemming from Friday's job report.

What this does is, it reinforces the market's view that the U.S. recovery is losing steam, says Greg Salvaggio, vice president of trading at Tempus Consulting in a Reuters interview.

There's a growing concern in the marketplace right now that previously the U.S. was thought to be the economy which was going to drive forward, regardless of events happening elsewhere in the world, Salvaggio added. Now there are some very, very serious concerns that the U.S. recovery is beginning to stumble.

Is this a major turning point for the dollar?

I don’t think this is a major turning point for the dollar, says Marc Chandler of Brown Brothers Harriman on the Halftime Report. I think it’s a simple correction and one that's long overdue. The dollar has appreciated sharply against the euro over the last several months.

Looking ahead, it wouldn't surprise me to see the euro could get even stronger over the next week or two, he adds but I expect the dollar to come back. Ultimately I'm expecting the European debt crisis to flare, once again.

Dollar Tree hit a 52-week high on Friday. How should you trade this stock now?

I like this stock and I'd put it on the radar, says Patty Edwards, even at these levels.

Johnson & Johnson has been beaten up a little, he says, but it has diversification a dividend yield and valuations look solid.

Is it a sign this hot trade is losing steam? What will air traffic look like this summer?

I expect traffic to be static over the summer, says aviation analyst Mike Boyd of the Boyd Group, but because of the weak economy I think demand could fall off in the fourth quarter.

If we get a positive move in the market I think the airlines could come back, says Pete Najarian.

I don’t like the space because of all the union obligations, says Steve Grasso.

If gas prices continue to come down I’d take a look at a different travel and leisure trade; Carnival, says Patty Edwards. They offer all-in-one vacations and I think consumers may find that attractive. 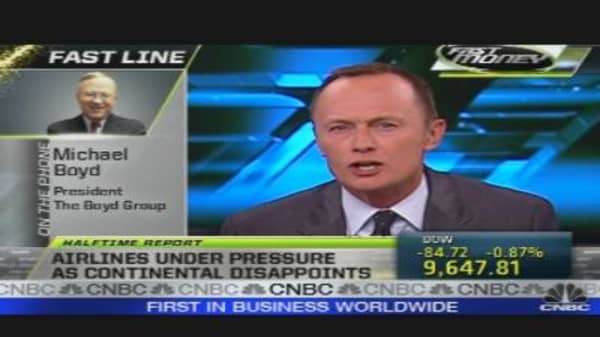 * Check out our entire interview with Mike Boyd. Watch the video now!