The Dow pulled off its fifth straight gain Monday but volume was some of the lightest this year as many investors took a wait-and-see approach to earnings season, which kicked off with results after the bell from Alcoa.

The tech-heavy Nasdaq also rose, while the S&P 500 slipped. The CBOE volatility index, widely considered the best gauge of fear in the market, was around 24.50 at the closing bell.

Microsoft was at the front of the Dow pack, up 2.3 percent, following a report in the Wall Street Journal that the software giant may be teaming up with Fujitsu on cloud computing. Brokerage Janney Capital raised its ratings on the tech giant to "buy" from "neutral."

Walmart wasn't far behind as investors played it safe with some bets in consumer staples.

Intel rounded out the Dow's top three as investors played the stock ahead of the chip maker's earnings, due out on Tuesday.

Materials, industrials and health care were the weakest sectors, with United Technologies , DuPont and Alcoa at the back of the Dow pack.

Alcoa was one of the worst performers in regular trading but rebounded more than 3.5 percent after-hours as the aluminum maker beat earnings expectations and raised its forecastfor growth in global aluminum demand for this year to 12 percent from 10 percent.

Reports are due out later in the week from Google , Bank of America , Citigroupand General Electric .

Some market pros say stocks could get a boost this earnings season.

"One thing that's kept us much more positive is the fact that corporate cash flows are huge," Bill Stone, chief investment strategist at PNC Wealth Management. "Cash flow has been extremely strong. It certainly bolsters the case when you look at cash flow yields. Companies are very mindful of their cash flows and have themselves set up very nicely." 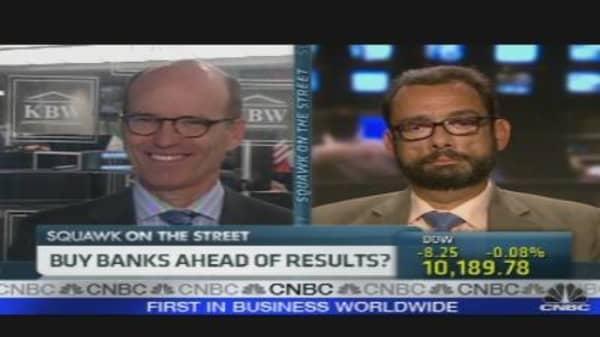 “We think the regionals have run a little bit too far in the first half of the year and they still don’t earn a lot of money at this point,” Miller told CNBC. “But when you look at JPMorgan and Bank of America , these companies are cheap on book.”

Several pros are betting on tech stocksthis earnings season, citing the fact that the sector has taken a beating amid fears about the sluggish global recovery.

Google shares continued to rise following news last week that China renewed Google's license to operate a Web site in the country, ending a long standoff between the two.

Apple and AT&T finished mixed following news that a lawsuit against the companies that centers around their exclusive iPhone arrangement and the quality of AT&T's network can continue as a class action case.

The S&P Materials index slipped after Chinese data over the weekend showed the country's demand for copper dropped, sending Freeport McMoRan down more than 4 percent.

Treasurys were little changedafter the latest round of three-year note auctions. The $35 billion sale fetched a high yield of 1.055 percent and the bid-to-cover ratio was 3.20.

The sale will be followed by auctions of $21 billion in 10-year notes Tuesday and $13 billion in 30-year bonds Wednesday.

Meanwhile, BP shares rose 8 percent after the oil giant said it expects to cap the gushing Gulf oilwell later today. BP is also putting the cumulative cost of dealing with the spill at $3.5 billion to date, and there are reports that the company may sell some assets to raise cash.

A weekend report suggested BP was in talks with Apache to sell about $18 billion in assets, including some in Alaska.

Oil prices slipped to $74.95 a barrelafter closing last week with a gain of more than 5 percent, its biggest weekly jump since May.

The euro fell against the dollar, pulling back from a two-month high and gold prices slipped below $1,200 an ounce, falling for the fourth time in the last seven sessions, as improved investor confidence boosted the dollar and sapped investment flows into the precious metals complex.

On the M&A front, Aon , the world's largest insurance brokerage, agreed to buy Hewitt Associates, a human-resources company, in a cash-and-stock deal valued at $4.9 billion.

And Playboy Enterprises surged more than 40 percent after founder Hugh Hefner proposed taking the company privateby buying all the shares he doesn't already own for $5.50 each; That stock is currently trading around $5.25.