There Must Be A Pony In Here Somewhere

Are We in a Recovery? Check the Underwear

There have been a lot of quirky economic indicators bandied about of late, from sales of lipstick to pick-up trucks — with varied results. 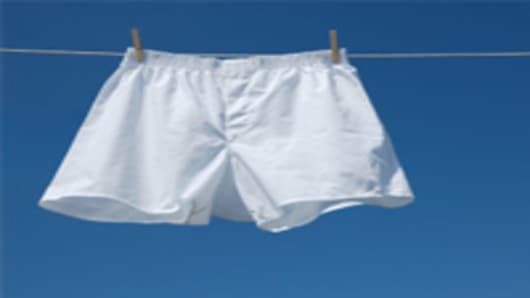 But men’s underwear sales even have the endorsement of former Fed Chairman Alan Greenspan, since they tend to be one of the first things men stop buying when times get tough.

So, while companies are offering up signs of recovery in their latest earnings reports, we wondered: What does the underwear drawer say?

He says customers had been hunkering down during the recession, buying a lot of the value (i.e., cheaper) brands and going for the multipacks when they did.

But things started to turn around in the first quarter.

“I started to notice the underwear business gain some momentum probably about five months ago,” Cohen said.

Men’s underwear sales are up about 8 to 9 percent this quarter from a year ago, according to NPD, after sliding 4 to 6 percent during the recession.

Men’s undershirts in particular are seeing strong sales, benefiting from the trend of the undershirt as a regular piece of clothing as well as the recovery in sales of the item as an undergarment.

Over at FreshPair.com, men’s underwear sales are up a whopping 40 percent year-to-date, double the growth in the women’s category. True to trend, the more expensive brands like Calvin Klein, Diesel and 2(x)ist are also starting to see a pickup in demand.

“The customer, I think, is shifting back to the brand they used to buy,” Kleinmann said.

And, underwear makers are taking notice: They’re expanding their product lines with more colors, more prints and more fabrics and even introducing new categories — like shapewear for men.

Spanx, which is known for its line of lady-slimming products, just debuted its men’s line —Man Spanx— in May.

Yes, we’re talking about mirdles (man girdles) but there’s so much more: Another hot category is underwear that enhances everything from the butt to the, ahem, frontal profile.

Make sure your celebration is festive — even if it’s brief!

More Signs From the Pony:

Questions? Comments? Write to us at ponyblog@cnbc.com or drop a comment below.

More from the Pony Blog at ponyblog.cnbc.com.