The White House’s decision not to invite the chief executives of JP Morgan Chase and Goldman Sachs to today’s ceremonial signing of the financial overhaul legislation has many on Wall Street fuming. 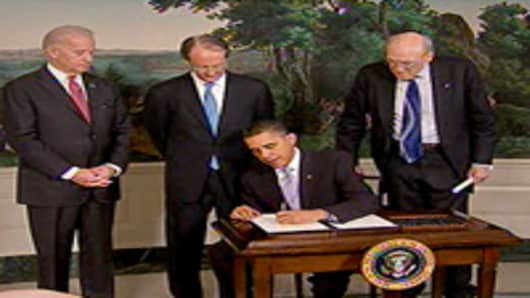 JP Morgan CEO Jamie Dimon and Goldman Sachs chief Lloyd Blankfein were both left off the invitationlist for the signing of the Dodd-Frank financial reform bill into law.

Rivals at other major financial firms—including the heads of Citigroup, Bank of America, Barclays, and Morgan Stanley—got invitations.

“Basically, the White House made the decision to invite only the banks that were most sycophantic in the run-up to the passage of Dodd-Frank,” one senior Wall Street executive said.

The White House has refused to comment on the invitations. Officially, neither Goldman Sachs nor JP Morgan Chase would comment about the matter. But privately, Wall Street executives who spoke to CNBC on the condition that they not be identified or their employer named, characterized this as a punishment for crossing the White House during the legislative process.

JP Morgan Chase was very active in the efforts to shape the legislation. Its chief, Dimon, publicly critiqued aspects of the bill. Goldman Sachs was less active and prominent but still played a role in lobbying lawmakersto have some aspects of the bill changed.

“Right now bankers polls as probably the only group of people less popular than politicians. I think the Obama administration made a decision that it enjoys being seen as having an oppositional relationship to Wall Street. This will continue until at least November,” a Wall Street executive said.

Complaints about the White House’s conduct were hardly confined to executives at the firms that weren’t invited.

“It looks a bit like crony capitalism—the White House playing favorites and rebuking companies that don’t instantly agree that every policy coming out of the Democratic caucus on Capitol Hill is the most brilliant idea ever,” an executive at one of the companies whose chief got an invitation said.

But if a war is brewing between Wall Street and the White House, it's a quiet and cold war. At least three executives who spoke to CNBC said that they feared White House retaliation if they were identified for this story. Others said they hadn’t been authorized by their employers to speak on the matter. No one would go on the record with their complaints.

Dimon was once described as Barack Obama’s favorite banker. Only a year ago, the board of directors of JP Morgan Chase held its board meeting in Washington, D.C. White House chief of staff Rahm Emanuel accepted an invitation to speak at the meeting, although this was later nixed by the chief counsel. Dimon has long been a donor to the Democratic party.

Goldman Sachs and its employees were the second biggest donors to the Obama’s campaign in 2007 and 2008, according to Federal Election Commission reports. Both Goldman and JP Morgan Chase were top donors to Emanuel’s congressional campaigns.

Those investments do not seem to have paid off.