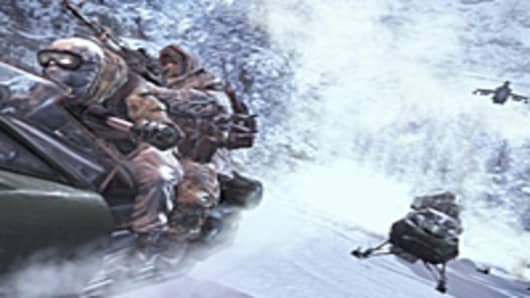 Digital distribution has been a hot topic in the video game industry for years – with developers, publishers and retailers trying to forecast when it will become a real threat to traditional brick and mortar stores.

New data, however, shows that time might be closer than many were expecting.

PC games, of course, are a small fraction of console game sales, but they’re often a trendsetter in the gaming industry. And Microsoft and Sony have both been ramping up the digital retail aspects of the Xbox 360 and PlayStation 3, respectively, for years.

While Electronic Arts and Activision-Blizzard both figured prominently on the list of top selling digital sales leading sites, it was privately held Valve Software that led the list with its Steam distribution service.

Launched six years ago, Steam now hosts and sells over 1,100 titles and has over 25 million active user accounts. Virtually every major publisher in the industry uses Steam to sell PC versions of its games. (Take-Two Interactive Software, for instance, launched a promotion Wednesday offering buyers of the upcoming “Mafia II” a free copy of the game’s highly-rated 2002 predecessor.)

NPD didn’t break out sales data or market share in its study, but competitors estimate Steam commands 70 percent of the PC digital distribution space. Valve doesn’t release sales numbers for Steam either, but earlier this year reported unit that sales increased by more than 205 percent in 2009.

Digital revenues at EA were up 33 percent in fiscal 2010, coming in at $570 million. Management said during the most recent earnings call it expects that number to grow to $750 million in fiscal 2011. (The figure includes income from advertising and subscriptions as well as its online store.)

"It’s now expanding that strategy...letting players buy games directly – something that will be particularly noteworthy with this year’s release of the PC-exclusive “Starcraft II” and “Cataclysm”" -CNBC, Chris Morris

Activision-Blizzard, meanwhile, has historically focused on in-game microtransactions, small dollar purchases that are made by a large number of players. In April, for example, the company began selling a virtual horse in its “World of Warcraft” game. Within eight hours, the queue to buy one was 80,000 players long and eventually topped 140,000. Activision is estimated to have made $3.5 million in one day on sales of the $25 item.

It’s now expanding that strategy, though, letting players buy games directly – something that will be particularly noteworthy with this year’s release of the PC-exclusive “Starcraft II” and “Cataclysm” expansion for “World of Warcraft”. Both games are expected to be significant sellers.

The “Starcraft” franchise is a cultural phenomenon in South Korea. The country has two television networks dedicated to the game and, in 2006, one professional player signed a three-year deal worth $690,000 – plus endorsements. It’s also one of the most loved game franchises among U.S. gamers. “World of Warcraft” is played by 11.5 million people worldwide – a number that’s greater than the populations of Ireland and Hong Kong, combined.

The console world, meanwhile, is playing much closer attention to digital downloads – and players on those game machines seem just as eager to embrace it. Add-on packs for popular titles, which used to be sold via retail, are now largely available only via the dashboards of the Xbox 360 and PS3.

There’s money to be made there, too. The first downloadable content for “Modern Warfare 2” racked up nearly $37.5 million in sales on the Xbox 360 alone within 24 hours.

Meanwhile, Valve and Sony earlier this year announced a deal that would begin to integrate Steam functionality into the PS3. Initially, it’s only for Valve’s forthcoming “Portal 2,”but it could open the doors to a big digital rush for the platform.

If that proves true, it could put additional pressure on traditional retailers such as Gamestop, which analysts have criticized for being behind the curve when it comes to digital transactions