Friday Look Ahead: Countdown on European Banks and Another Big Earnings Day

It's high noon for the European banks. 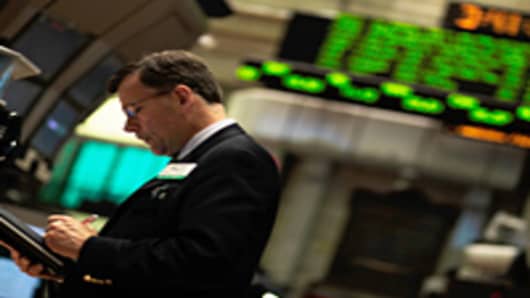 Or, at least it will be in New York. As of Thursday, the expectations were that European regulators and banks would reveal the results of stress tests Friday for 91 institutions at 12 p.m. New York time, after European markets close.

Ahead of that, markets will get another dose of earnings news, including Ford, McDonald's, Verizon, Honeywell, Kimberly-Clark, McGraw-Hill, Johnson Controls, Schlumberger and Ashland. A stream of solid results Thursday pumped up the stock market, sending the Dow up 201 points, or 2 percent, to 10,322 and the S&P 500 up 2.3 percent to 1093.

Some traders and analysts say the European stress test results could be somewhat anticlimactic, and they've been expecting results to leak out ahead of the deadline. Others worry the tests will not appear to be a credible measure of the real health of the banks, and that could stress out markets even more.

"We need to step back here actually. Two weeks ago, we were excited about it because we felt like the market wasn't focused on it at all, and we thought the chances of it going okay were good, and the market pooh poohed it. But a week ago, it became the opposite extreme, with too much optimism and the market reacted positively," said Greg Peters, global head of fixed income research at Morgan Stanley.

Traders expect very few banks to fail the test, and those that have been frequently mentioned to be potential problems are the state-run German Landesbanks and Spanish regional savings banks, known as cajas. Spain has been forcing the consolidation of its weak banks, and traders don't expect the German banks to show up as failures.

"The market's going to focus on the jurisdictions that highly politicized the process. The Germans are the quintessential example, and even Greece. They're going to find that Greece doesn't have any capital holes, but who cares? The IMF is in there," Peters said.

"It's been highly politicized, and you need to really look at what the purpose was all along..and that was about Spain," said Peters. "The Spanish regulators are perceived to be pretty decent and those tests are probably more important than Germany."

Peters said there's a chance credit markets could react negatively to the stress test results, but that could create an opportunity to buy. "Spain has the best chance of pulling it off, and that's the key either way, and it's going to take a while for the market to digest that...Two months ago, for example, I don't think anyone felt like this was even on the table, and that it was in complete disarray and there was nothing to be done," he said.

Markets Thursday took comfort from better than expected European PMI data, and got another leg up when some major U.S. corporations reported better-than-expected earnings and were reasonably positive in their outlooks.

UPS, Caterpillar, 3M, and AT&T all had better profits before the opening bell. Microsoft's earnings and revenues beat estimates when it reported after the bell. Amazon, however, was a disappointment when it reported second quarter earnings of $0.45 per share on sales of $6.57 billion, below the $0.54 per share expected.

Joel Levington of Brookfield Investment Management said he's hearing more positives than negatives from corporate executives this earnings period. "I've been on 25 earnings calls this quarter. By and large, they don't sound bad. I think everybody has a sense of cautious optimism, which is really the best way of expressing it. When you're beating expectations and raising guidance, it's hard to sound negative," he said.

"What I've seen so far in the capital goods sector has been lights out this quarter, whether you're talking about machinery names, diversified names," said Levington, who is managing director of corporate credit. Levington said both Omnicom and WPP, which preannounced, have signaled that advertising is strong. "That bodes well names in media, like Comcast and Time Warner," he said, when they report next week.

After Ford shelved plans this week to float an offering backed by a package of auto loans, the SEC stepped in to temporarily help the stalled out asset-backed securities market. In response to the affects of the freshly signed Dodd Frank law, the SEC said late Thursday afternoon that it expects to issue a "no action" letter allowing ABS issuers to omit credit ratings from registration statements for a period of six months. Ford's deal was pulled because it was unable to get credit ratings on its offering documents, required for asset-backed securities offerings.

"I don't think it's an issue for corporate debt. It will be an issue for a few corporations. The corporates where you would see an effect are heavy machinery companies and auto companies, where you see structured paper," said Levington, ahead of the SEC release. He said for instance, Caterpillar and Deere may see a small impact if the rule stands, but CNH would be impacted much more since it is a high-yield company without a lot of flexibility. GM and Ford would also be impacted.

The SEC, in its late day statement said that it doesn't believe the corporate debt market has been or would be impacted by the statutory change. It also said it is providing a transition period for issuers, rating agencies and other market participants to comply with the new statutory requirements while still conducting ABS offerings.

"I think the government has to reassess what they just implemented," said Levington.

"It's a big deal," Peters said before the SEC released its comment. "What's mystifying to me is for all the benefits that TALF (Fed program) had done is completely unwound. Why would you try to hurt the shadow banking system and try to hurt an avenue for capital for the consumer."

"These companies are not posturing. It's just unworkable," said Peters. He said the government rule changes were correct directionally but went too far. The rating firms under the rule have to take on more liability for each loan in the package until maturity.

Fed Chairman Ben Bernanke commented on the crippled ABS market during his Congressional testimonyThursday and said he would work with the SEC to find a solution. He said a return by the Fed to the TALF (Term Asset-Backed Loan Facility) program would not be useful. He said a better solution would be to ensure investors get the information they need

Oilclosed more than 3 percent higher on Thursday, just above $79 per barrel, as the threat of tropical storm Bonnie blew through the energy market. The storm is forming near the Bahamas and heading toward the Gulf.