Retailers Pay More to Get Cargo (No Guarantee)

The grills shaped like kegs and toolboxes, ordered for a Father’s Day promotion at Cost Plus World Market, arrived too late for the holiday. At the Container Store, platinum-color hangers, advertised in a summer sale catalog, were delivered days after the sale began. At True Value Hardware, the latecomers were fans and portable chairs. 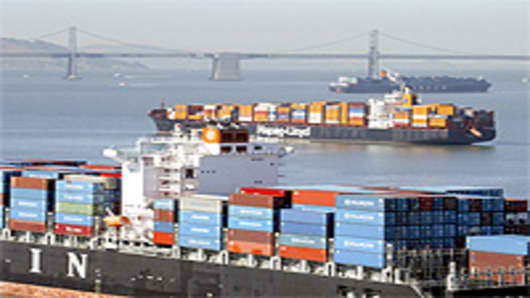 Fighting for freight, retailers are outbidding each other to score scarce cargo space on ships, paying two to three times last year’s freight rates — in some cases, the highest rates in five years. And still, many are getting merchandise weeks late.

The problems stem from 2009, when stores slashed inventory. With little demand for shipping, ocean carriers took ships out of service: more than 11 percent of the global shipping fleet was idle in spring 2009, according to AXS-Alphaliner, an industry consultant.

Carriers also moved to “slow steaming,” traveling at slower and more fuel-efficient speeds, while the companies producing containers, the typically 20- or 40-foot boxes in which most consumer companies ship goods, essentially stopped making them.

“All my customers, they’re having a terrible time,” said Steven L. Horton, principal at Horton Global Strategies, which negotiates freight contracts for companies. “With the increased cost and them not knowing if they’re even going to get the space or equipment, it’s a weekly battle.”

The fight for space means many retailers are expecting higher sales, which is a glimmer of good news. And air carriers are picking up some last-minute shipments from desperate retailers; FedEx reported on Monday that it expected increased earnings for its first quarter, ending next month.

But for most retailers and suppliers, the shipping problems are a huge headache at a time when retail sales are weak and consumer confidence is waning. “It’s made this key selling season even more complicated,” said Edward J. Yruma, an analyst with KeyBanc Capital Markets.

The shipping companies slowly added ships back into the system early this year, but they did so haltingly, not wanting to add too much supply and risk having their rates fall. (Major carriers largely hew to the rates set by carrier groups, which are allowed to discuss and setvoluntary rates, under antitrust immunity.) Lifetime Brands, which makes and sells products under brand names like Cuisinart and KitchenAid, said it was now paying about double last year’s rates, and Costco said it was now back to 2007 rates.

Companies that lack contracts with shippers are paying even more. The cost of shipping a 40-foot container from Hong Kong to Los Angeles without a contract, or the spot rate, was about $871 in July 2009, a five-year low. This month, that spot rate reached $2,624, a five-year high, according to the industry consultant Drewry Shipping Consultants, as reported by The Journal of Commerce. That exceeded even the cost before the recession, which was about $2,000.

Because of slow steaming, which takes containers out of the system for a longer period of time, and because places like Russia and India began to demand container space, finding something to ship goods in, much less space on a ship, has been problematic.

“There aren’t enough actual containers, so therefore, even if the vessel capacity situation is easing up a little bit,” said Peter Tirschwell, senior vice president for strategy at The Journal of Commerce, “you now have equipment that people can’t get.”

(While container shipping has recovered from last year’s lower spot prices, commodity shipping, where companies ship raw goods like iron ore or petroleum, remains in a depression. This month, the Baltic Dry Index, which measures commodity shipping costs, fell for the longest number of consecutive days in almost nine years because of low demand for materials like steel.)

The problems in container shipping from Asia are the most pronounced, retailers say, but shipments from other continents, and via domestic trains and trucks, are difficult as well. The effects have been severe for some retailers and suppliers.

To get products in on time, they need to spend a lot more. Cost Plus, for instance, has used air freight for some time-sensitive items, and that costs about 10 times what sea freight does, said Jeff Turner, who oversees supply chain and store operations. And for sea cargo, even though contracts with freight companies exempt Cost Plus from summer surcharges, known as peak-season surcharges, the retailer is paying them.

“We have agreements that literally say we don’t have peak-season surcharges for our business, but we’re treading completely new ground. Our carriers are coming to us and saying, ‘If you want to get on the vessels, we need to figure out how you guys pay peak-season surcharges,’ ” Mr. Turner said.

Mona Williams, vice president for buying at the Container Store, said the company was telling manufacturers to book space well in advance, and that it was moving delivery dates earlier.

And for items that simply must arrive, well, there are ways to do it. “Sometimes you can offer to pay a steamship company a larger amount of money, and they might take somebody else’s container and not put it on,” said Jeffrey Siegel, the chief executive of Lifetime Brands, but “in most cases, you just have to wait.”

To play it safe, Mr. Siegel has started scheduling items to arrive as long as three months before they need to be in stores. That means a higher cost for holding inventory than usual, but interest rates are relatively low, and he would rather have the goods in hand, he said.

The companies also risk losing sales if anything is late.

For instance, Cost Plus, a home décor chain with more than 260 stores nationwide, had to quickly revise advertising and in-store arrangements when it learned grills would be late for Father’s Day, and beach chairs would arrive after a summer promotion ended. “You’re trying to convince your customers to take a rain check — ‘It’s coming’ — or explain why it’s not there,” Mr. Turner said. “It’s not easy.”

For True Value, which had difficulty getting summer items like fans and grills on time, the worry was not about the retail customer, but about the stores it supplied.

“True Value stores can buy from other wholesale distributors, so they can look elsewhere,” said Don Deegan, vice president for logistics for True Value. The company has bought more expensive items when it knew it would miss a deadline, he said, to placate the stores.

Steve Walterscheid, the president of Zing Toys, which makes some summer toys, said that after his orders kept getting bumped from ships, some retailers would not take the late deliveries. “Some will still accept it, some won’t,” he said. “In a short season, if you miss two weeks of a season, that’s quite a bit.”