With Wall Street and Congressional Republicans trying to scuttle the possible nomination of Elizabeth Warren as the director of the powerful new Consumer Financial Protection Bureau, there's growing speculation that the White House will announce its choice for the post in August, after Congress has adjourned for its summer recess.

"It needs to get done and get done soon," said one senior Congressional staffer, adding that the timing would mean there are "less people in Congress around to run to a microphone" to express their opposition. Recess begins August 9.

"I feel its imminent," said a representative of a prominent non-profit, consumer group.

Some Democrats, including Senate Banking chairman and financial reform bill co-author, Chris Dodd of Connecticut, are anxious to get the agency set up and a director in place. 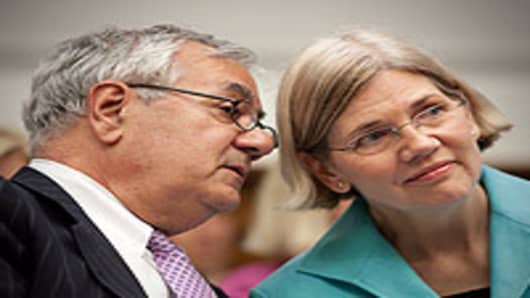 Another key consideration is whether the Obama administration will name an interim director or a permanent one. Under the recently enacted financial reform legislation, the former does not require Senate confirmation and can serve up to six months.

The consumer protection post has become both a political hot potato in Washington and another flash point between Wall Street and the Obama administration.

Warren, who chairs the Congressional Oversight Panel overseeing the TARP program, is an outspoken consumer rights advocate, is feared or loathed by many in the financial services industry.

On Capitol Hill, she is not much more popular in Republican circles. As the House debated its version of the financial reform bill creating the new watchdog agency, one Republican crafted an amendment dictating the director's qualifications solely for the purpose of excluding Warren. It failed.

But Warren, a former Harvard University professor, has broad, and in some cases, strong, support among Democrats in Congress, including a key author of the financial reform bill, House Financial Services Chairman Barney Frank of Massachusetts. Most Republicans, however, vehemently oppose her.

Warren's chief rival for the position is Michael S. Barr, the Treasury Department's assistant secretary for financial institutions, who has overseen the administration's massive foreclosure prevention program and also served as a liaison with Congress on the reform legislation.

Naming an interim director in the near future makes sense for both organizational and political reasons, according to the Congressional source. It allows work to begin on the sizable and complicated task of staffing an agency and writing regulations.

"It's also a practical political move," the source said. "It can calm your critics," while you vet your permanent candidate, especially if "the confirmation process is going to take six months."

"It's reasonable if you plan to appoint an interim," says Mark Calabria, who served as a senior Senate aide before joining the Cato Institute. "If they don't do anything between now and the election, then people will just speculate on who it will be."

Barr was confirmed for his current Treasury post, so that's an asset in making him interim director. Warren's Congressional oversight post did not require confirmation. (Eugene Kimmelman, a deputy assistant attorney general, and former VP of Consumers Union, a public interest group, is also being considered.)

The August timetable also makes sense for naming a permanent director, because there's limited time left for the Senate in the current Congress to debate and vote on a candidate, and Congressional Democrats seem anxious to move forward with the agency.

In addition a vote in a lame-duck Congress, particularly if the Democrats lose seats in both houses, could be difficult and dubious, say analysts, while having a consumer agency boss approved and on the job could actually win some votes, if not turn any individual race.

Though much has been made of Warren's qualifications for the job, the director post may come down to whether the Obama administration wants an insider or an outsider. 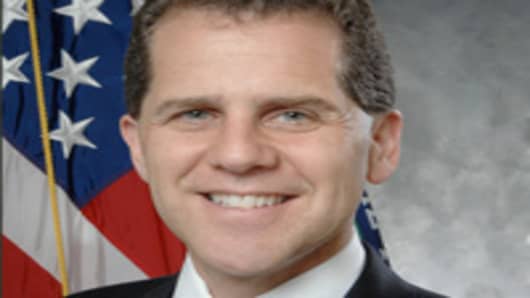 "There's something to that," says Dean Baker, co-director for the Center for Economy and Policy Research. "Barr is a loyalist to the Obama administration. He's definitely someone (the President) can rely on. She [Warren] is associated with Congressional Democrats."

Warren, in fact, was picked by Senate Majority Leader Harry Reid [D-Nev.] to chair the oversight committee, whose principal job was to monitor and second guess the Treasury's administration of the $700 billion bailout program for the nation's banks, the Troubled Asset Relief Program.

In many ways she's been as critical of the Obama administration as the Bush one, and, sources say, she and Treasury Secretary Timothy Geithner do not get along.

"I suppose it was the Congress that was listening to her," says former White House economist and regulator, Lawrence White, now with NYU's Stern School of Business. "Warren was the Congressional person. Barr is the executive branch guy. He could be the Treasury's point guy to make sure all the regs get written right."

Some say picking Barr is consistent with the Obama administration's need to shape and control the agenda on financial reform.

"Some felt Congress lost control [of the legislation]," says Baker. "For the most part, the administration won out—both on procedure and substance."

Which makes it all the more understandable why some in Congress might now be pushing hard for Warren.

"There's been a big campaign to pressure the President on that," said a source, and the White House has more than once indicated that it is both comfortable with and confident in Warren.

While much of this may suggest that personality and politics could be the over-riding considerations in picking the director of the Consumer Financial Protection Bureau, even those who think favorably of Warren say the Obama administration may nevertheless be leaning to its pragmatic side.

"Some consumer protection things may impinge on safety and soundness, " says White, a former savings-and-loan regulator. "The administration clearly understands that there needs to be a trade off. I'm not sure that Warren sees the trade-offs."