Big unions are spending millions to get their message across.

Big labor is pressing its 15 million membersinto service this midterm election and prepared to spend record amounts intent on preserving gains made in the first two years of the Obama administration. 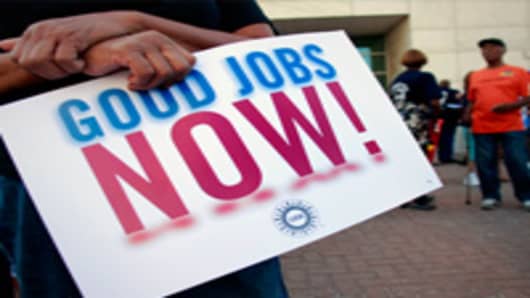 Amid flat wages and high unemployment, union leaders are working hard to paint a dire picture of Republican victories.

"I think if we will go back to where corporate America and Wall Street ran wild,” said Richard Trumka, head of the 10-million member AFL-CIO. “They will do everything they can to continue the policies of the last 30 years. You will see more tax cuts for the rich."

"If the GOP takes control of the House in November, we predict things will be very, very bad for working people, especially given the Republican track record over the past two years," adds United Auto Workers President Bob King.

The push comes as labor's share of the workforce continues its long decline. To say about 12 percent of US workers are represented by a union, vs. 35 percent in 1953. Even fewer union members are employed in the private sector. 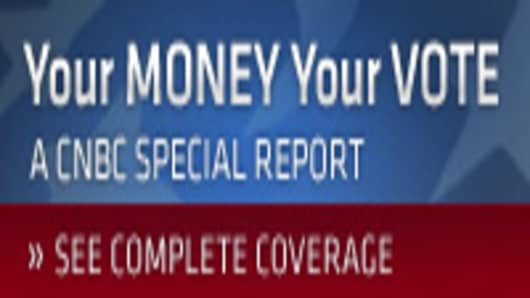 Your Money Your Vote - A CNBC Special Report

Somewhat offsetting that decline is exit poll data from the 2006 midterm elections showing that union households represented 23 percent of the total vote, which clearly made a difference in battleground states like Ohio and Indiana, that went to Obama two years later.

The Service Employees International Union, which broke from the AFL-CIO in 2005, will spend $44 million—up 26 percent from the 2006 mid-terms.

The American Federation of State, County and Municipal Employeeswill spend $50 million this year, up from $32 million last year.

The union has 300 staff people working full-time until November “out there working with members, making sure they’re registered and informed,” said Larry Scanlon, AFSCME political director for the past 16 years.

The budget is funding issue ads, PAC fundraising, a boot camp for candidates, a national redistricting project and financing for the National Committee for an Effective Congress, a political action committee that backs liberal candidates.

“The external piece will involve a lot of ads, radio and cable in selected areas where we think we can make a difference, either supporting our friends or opposing our enemies,” said Scanlon.

If the budgets are high, so are the stakes.

“A poor showing by the unions this November would cripple the Obama presidency,” said Harley Shaiken, a professor of social studies at UC-Berkeley and a respected adviser on labor issues. “Labor knows it and is pulling out all the stops. Labor always performs well when it’s the underdog and the stakes are high."

The first two years of the Obama administration have been good for labor, even if times have been tough on its rank and file.

"They came into office on the brink of recession, with a primary focus of trying to stave off a depression," said Scanlon. “They pushed through the Recovery Act and kept Wall Street from crashing. They kept the auto industry from collapsing and US automakers are now selling new cars and paying off their government loans.”

After that came sweeping health care and financial reform packages, extended unemployment benefits, and the recess appointment of Craig Becker, the former counsel to the Service Employees International Union, to the National Labor Relations Board.

“These are all things labor wanted,” Shaiken added. “By no means did they get everything they wanted, but all in all, a productive two years.”

Still, there is plenty of disappointment among union members over the stalled progress of the Employee Free Choice Act, EFCA, so-called “card-check” legislation that would make union organizing much easier.

When President Obama addressed the AFL-CIO’s executive council in Washington in mid-August, he said he understood labor’s situation

“If you are talking to a lot of your locals, I’m sure they’re saying, ‘Boy, change is not happening fast enough. We are still hurting out here," Obama said. “They have every right to be frustrated.”

But in a refrain he has repeated regularly since then, Obama put the blame on Republicans.

“You have to remind [union members] that for the next three months, this election is a choice,” he said. “You got these folks who drove America’s economy into the ditch. And for the last 20 months, we put on our boots and got into the mud and have been shoving that car out of the ditch inch by inch.”

Democratic candidates got more than 90 percent of the $75 million that unions spent on federal candidate during the 2008 elections. But union leaders and experts are quick to point out that their members march to many different drummers.

Longtime labor observers painfully recall the lopsided 1980 and 1984 elections victories of Ronald Reagan, thanks partly to “Reagan Democrats,” mostly blue collar workers—many of them union—who were fed up with the double-digit inflation of the Carter years.

The labor movement is not quite the social movement it is in Europe," said Craver. Our unions are quite conservative and business-oriented," adding that The Tea Party movement counts many union people among its members. “Same with [Sarah] Palin supporters."

Palin, the GOP’s vice presidential candidate in 2008 and a Tea Party favorite, recently reached out to union workers on her Facebook page, mentioning that both she and her husband were members of the International Brotherhood of Electrical Workers.

“To my hardworking, patriotic brothers and sisters in the labor movement," wrote Palin. "You don't have to put up with the scare tactics and the big government agenda of the union bosses. There is a different home for you: the commonsense conservative movement.”

The AFL-CIO is trying to blunt the appeal of conservative candidates with its "Working America" program, a nationwide effort to reach workers who are not union members but who may agree on with on many issues, such as good jobs, affordable health care, world-class education and secure retirement.

“The Tea Party is a real phenomenon, of which labor is well aware,” said Shaiken. “Reaching Palin voters is what the Working America movement is about. Many are non-union voters but they are working-class voters. Labor is making a real effort to engage precisely those voters, the Reagan Democrats of the 21st century.”

Big labor is facing another wild card this election season: The 5-4 US Supreme Court ruling in the Citizen United case, which said the government can’t limit or ban political spending by corporations, organizations (PACs) or unionson the First Amendment’s principle of free speech.

“It’s a bit hard to say what the effect of Citizen United will be,” said Shaiken. “It allows labor put more money in, but labor can’t match big business dollar for dollar, especially with Wall Street turning heavily to the GOP.”

"The impact of Citizens United does not necessarily advantage corporations," said R. Bruce Josten, executive vice president for government affairs at the U.S. Chamber of Commerce , which is reportedly spending $75 million on the election. "Labor unions ... are already the single biggest monolithic contributor to political campaigns in the country. It stands to reason that organizations that have already inundated the political landscape are more likely to expand on those efforts then a public company that has earning targets, investment analysts, ratings agencies, boards and shareholders to worry about."

One post-Citizen United Federal race that attracted plenty of interest and money was the Democratic Senate primary in Arkansas.

Upset with Sen. Blanche Lincoln, the incumbent who opposed both EFCA and the public option in the health reform bill, big labor spent an estimated $10 million attacking her and promoting her opponent Lt. Gov. Bill Halter.

Unions were able to spend money from their general funds, not just those provided by members specifically for electoral campaigns.

Labor came up short, as Lincoln won the primary, but some say the union campaign pushed her into promoting tough legislation on derivatives legislation.

At this point, the 38 gubernatorial races underway also provide some insights. Based on the ruling, the two parties’ governors associations can take unlimited amounts from corporations and unions.

In June, Rupert Murdoch’s NewsCorp gave the Republican Governors Association $1 million, while Wellpoint , the largest US health insurer, kicked in $500,000, according to Evan Tracey, president and founder of Campaign Media Analysis Group.

Meanwhile, the Service Employees International Union donated $1.1 million to the Democratic Governors Association, while the AFSMCE gave it $3.3 million.

Though many independent election forecasters say there's a good chance the Democrats will lose control of the House—they now have a 78-seat advantage—Big Labor expects them to hold on to a slight margin. The same goes for the Senate, where the Dems now have an 8-seat advantage.

“They will put record resources into the field," said Shaiken. “Will they be able to effectively mobilize their base? The turnout of that base is critical for the Democrats to survive.”

“If you go back to 1994, when the GOP took over the House, a lot of union members stayed home and didn’t vote,” said Scanlon. “Look at the 1998 and 2002 mid-terms, Union turnout was a lot stronger. This time, all unions are running very active programs. You can win with a smaller turnout if you do your work.”