As part of his emerging program to jolt the economic recovery from its stall, President Obama will call this week for allowing businesses to deduct from their taxes through 2011 the full value of new equipment purchase, from computers to utility generators, to increase demand for goods and create jobs. 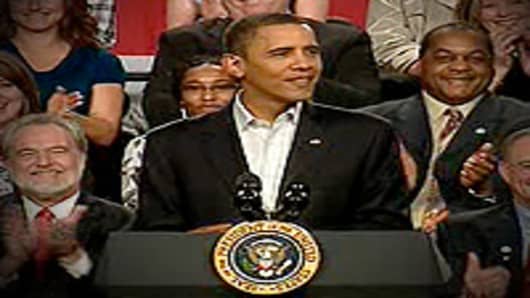 The upfront deduction would allow businesses of all sizes to keep more money now and would give large corporations, many of which are sitting on cash because of uncertainty about the economy, an incentive to spend and invest.

It would cost an estimated $200 billion in revenues, though the ultimate net loss would be $30 billion over 10 years, administration officials say, since businesses would eventually deduct the depreciated value of the equipment in any case.

The proposal for 100 percent expensing through 2011 will be part of a package that Mr. Obama will outline on Wednesday in Cleveland in a speech on the economy.

The stimulus initiative will also include proposals for an additional $50 billion for infrastructure investments and a new infrastructure bank for projects over the long term, which Mr. Obama described at a Labor Day event in Wisconsin on Monday.

And it will have a provision to expand and make permanent a tax credit for corporations’ research and development expenses; for three decades, the credit has been enacted temporarily, given its revenue cost, and then always extended, but with frequent lapses that frustrate businesses.

Those ideas and others that Mr. Obama may propose on Wednesday have been under consideration at the White House for some time. But August’s mix of disappointing economic data and deteriorating poll numbers for Democrats heading into the midterm elections prompted the president, with evident impatience, to publicly press his economic team to quickly produce options that could help the economy without excessively increasing the debt.

Though liberal and labor groups have been agitating for public works spending, Mr. Obama and his advisers are emphasizing business tax cuts in hopes of drawing Republican support — or, failing that, to show that Republicans are so determined to thwart Mr. Obama that they will oppose even ideas that they and most business groups, like the U.S. Chamber of Commerce, advocate.

A draft paper on the proposal permitting businesses to write off the full costs of capital spending in 2010 and 2011 said it “would be the largest temporary investment incentive in American history.”

Stimulus measures enacted at the end of the Bush administration and continued in 2009 allowed businesses to depreciate 50 percent of qualified investments. A separate administration proposal to benefit small businesses with tax cuts and loans, which has been pending in Congress much of the year and remains blocked by Republicans in the Senate, would extend this smaller tax break through 2010.

Mr. Obama would expand this to 100 percent through 2011 and make it effective retroactive to this Wednesday, regardless of when Congress might approve the proposal.

According to the draft description from the administration, the proposal “would put nearly $200 billion in the hands of businesses over the next two years — helping companies that make new investments in the United States at a time they need it most.”

But, it added: “Most of this relief would be recouped by the Treasury as businesses regain their strength. Specifically, businesses would get the upfront deduction for their investment — now when they most need it — but would give up their future annual depreciation allowances in future years when the economy is stronger.”