Investing in America - A CNBC Town Hall with President Obama

President Obama told a town-hall meeting that stimulus measures his administration has taken have "worked" but said they're considering additional incentives to spur hiring. 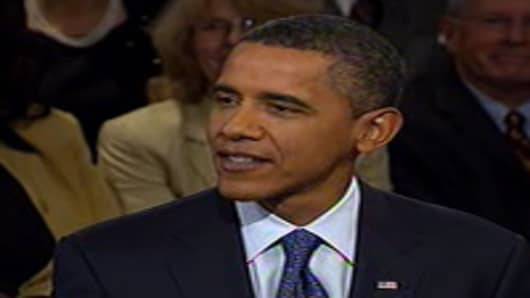 "Those programs we put in place worked. Now you’ve got a financial system that’s stable ... You've got eight consecutive months of private sector job growth and businesses investing again," the president said in “Investing in America,” a town-hall meeting sponsored by CNBC. The audience was a cross-section of the nation, including CEOs, union workers, teachers, students and small business owners.

"The challenge is, the hole was so deep a lot of people out there still hurting," he said.

"It’s slow and steady as opposed to the quick fix I think people want to see," he said.

With nearly 15 million people still unemployed, jobs have been a key sticking point for the president heading into the midterm elections. A recent poll found that 42 percent of Americans blame the president for economic slowness, compared with 50 percent who blame former President Bush.

"The single-most important thing we can do is to grow our economy," he said.

The president defended criticism that he is anti-Wall Street, saying he isn't villifying business.

"[W]hat sets America apart what has made us successful over long term is we've got the most dynamic free-market economy in the world. And that has to be preserved," the president said.

"We benefit from entrepreneurs and innovators who are going out there and creating jobs, creating business. Government can't create the majority of jobs. And, in fact, we want to get out of the way of folks who've got a good idea and want to run with it and are going to be putting people to work."

Last week, the Senate passed a small business stimulus plan that would create a $30 billion lending fund to help with spending and hiring, and provide $12 billion in tax breaks. Still, the president has come under fire for not extending the Bush tax cuts, which some worry could further set back the jobs recovery.

The president said the Bush-era tax cuts should be extended for the middle class but not top earners.

"I can't give tax cuts to the top 2 percent of Americans ... and lower the deficit at the same time, I don't have the math. I would love to do it," Obama said.

“It’s a two-way street. If you’re making a billion dollars a year after a very bad financial crisis where eight million people lost their jobs and small businesses can’t get loans. Then I think that you shouldn’t be feeling put upon," Obama said. "The question should be how can we work with you to grow the economy?”

The president pointed to "eight tax cuts for small businesses" that have helped spur hiring so far and noted that the bailout of the Big Three auto makers may not have been popular but it helped improve business — and hiring.

When asked about a payroll tax holiday, the president said he would consider "any idea that we think will help."

"We’re going to be working with businesses to see does it makes sense for us to initiate some additional incentives in order to hire," Obama said.

The government's latest employment report showed jobs were lost for a third straight month in August but fewer were lost than expected and private hiring picked up. A private report showed planned layoffs hit a 10-year low last month.