If A Guard Holds Out, Does Anyone Notice?

Throughout recent sports history, plenty of holdouts have garnered attention. Most of them involve high-profile wide receivers or running backs, and, most recently involved the 36-day holdout of Jets cornerback Darrelle Revis. 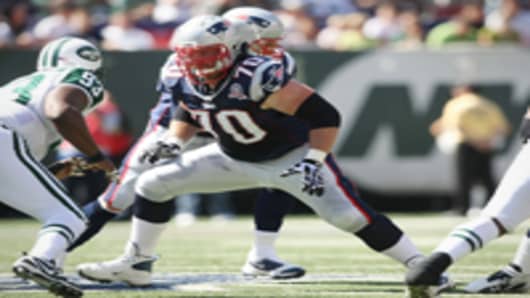 But Logan Mankins holdout of the New England Patriots might qualify as one of the most fascinating holdouts of all time.

It involves an incredible plot line of he said, he said. In this case, someone leaking to ESPN's Adam Schefter that a deal that would make Mankins one of the highest paid at his position (about $8 million a year) was essentially done, ready to be signed, but was pulled back after Mankins refused to oblige to Patriots owner Robert Kraft's condition that he publicly apologize for his negative comments made about the team. For his part, Kraft said a deal was never done.

Unfortunately for Mankins, a bad Patriots loss to the Jets on Sunday doesn't mean he's any closer to having the money in his pocket and his body on the field. Why? Because, unlike a missing wide receiver, running back or quarterback, it's hard for even the most educated football fans to grade out an offensive lineman's performance and tell you how that affected the game.

"I can't tell the difference between a guard who is pretty good and a guard who is the top three at his position," said Ian Rapoport, the Patriots beat writer for the Boston Herald and author of the blog Rap Sheet. "I assume the Patriots run game might have been better against the Jets with Mankins in the game, but if the team averaged 3.2 yards per carry instead of 2.2 yards per carry, am I going to throw my telephone at the TV? Of course not. It's not something that's tangible to the fan."

Owners don't like to fess up to this, but public pressure does play into whether the team folds to a holdout. Jets owner Woody Johnson said he couldn't see how the Jets would sign Revis. But mere days later, it was all smiles and handshakes.

Mankins' greatest problem is that today's Boston papers don't have columns about how his absence caused yesterday's loss. And the major breakdown on the offensive line -- when Jason Taylor strip sacked Tom Brady -- was Pats offensive tackle Matt Light's blown assignment, not the fault of Mankins' replacement, Dan Connolly.

Connolly's apparent competence at the position is what truly makes it impossible for Mankins -- who had started every game at guard for six seasons -- to hope for the public and the media to help force Kraft's hand. With Connolly making a measly $600,000 this year, who knows if a public apology from Mankins, if it ever happens, would make him a Patriot again at the price he's asking.