Investing in America - A CNBC Town Hall with President Obama

WASHINGTON—President Obama defended his administration's record toward business, during a town hall, while simultaneously deriding his critics as being politically motivated and saying he would work on "setting a better tone" in Washington. 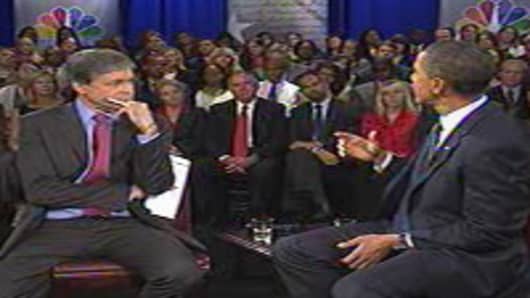 Sharing an hour with a largely friendly crowd that gave him hoots of approval and a standing ovation at the end of the "Investing in America" forum, Obama spoke with the economy at a crossroads and the nation's precarious political structure hanging in the balance

"I know how frustrated people are. I know in some cases how desperate people are," he said, later adding, "I am confident that if we stay on a course that gets us back to old-fashioned values of hard work and responsibility and looking out for one another, that America will thrive."

He didn't deliver any major news pronouncements but offered a spirited defense of his administration's efforts to revitalize the housing industry and generally fix the economic problems he inherited when taking office in 2009, including the $800 billion stimulus program.

The president spoke just as the National Bureau of Economic Research proclaimed an end to the recession. But Obama acknowledged that times are still tough.

"Obviously for the millions of people still out of work, people who have seen their home values decline, people struggling to pay their home bills every day, it's still very real for them," Obama said.

The audience included college students and union leaders, small business owners and retirees in a meeting of Wall Street, Main Street and Washington.

They quizzed him on a variety of issues, with one woman imploring him to give her more reasons to defend his record thus far and a hedge fund manager pressing him on why he was treating Wall Street like a political pinata.

But the approach from questioners was cordial and at times admiring, even though he faces approval ratings in the low 40s and his Democratic Party in danger of losing control of Congress following the November elections.

He in fact challenged his critics, particularly those in the Tea Party, to do more than offer barbs and historically failed policies and instead propose solutions. 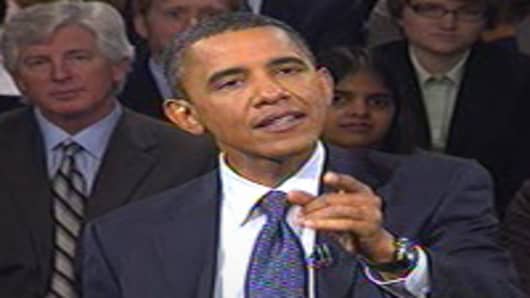 With the president and Congress enmeshed in a heated debate about tax policy and a grumpy electorate tossing incumbents aside like rag dolls, the forum provided an opportunity to chart a clearer course for a president whose poll numbers are strikingly low and his party beginning to revolt.

He acknowledged the political issues he faced but bristled at a suggestion that Ohio Rep. John Boehner would be the next Speaker of the House—an assumption that would require a Republican majority next year.

Faced with a thorny debate over extending tax cutsenacted under former President George W. Bush, the president made his strongest indication yet that the top-tier cuts—for those making more than $250,000 a year—were unlikely to stand when they expire at the end of 2010.

"Here's what I can't do: I can't give tax cuts to the top 2 percent of Americans—86 percent of that money going to people making a million dollars or more—and lower the deficit at the same time. I don't have the math," he said. "At some point in the future if we want to have the discussion about further lowering tax rates, let's do it at the time when we can afford it."

The event was held at the Newseum, a monument to the First Amendment and a few blocks up Pennsylvania Avenue from the White House. 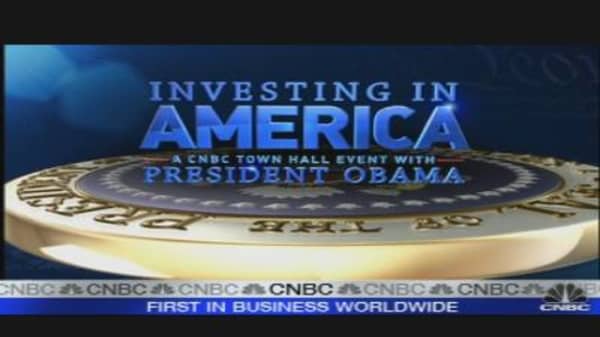 CNBC chose the site both for its free-speech symbolism and its capacity to handle such events. The network held a similar event last year for Treasury Secretary Timothy Geithner.

Obama faced some testy questions as his battles with Wall Street intensify.

Even as he touted a recent agreement for $30 billion in small business loans, critics say his administration has been decidedly anti-business with its new and costly health care reform programs and the uncertainty over whether he will let tax cuts expire at the end of 2010.

But he defended his tack towards businesses, pointing to "eight tax cuts for small businesses" when questioned by an audience member.

And he also cited the government's bailouts of the auto companies as moves, though initially unpopular, that helped improve the business climate.

A new CNBC poll found that 90 percent of Americans are concerned about the economyand 55 percent feel that repealing tax cuts would be detrimental. The administration and Congress have been having back-and-forth negotiations on whether to continue the cuts.

While the lower-bracket cuts are less controversial, Congress remains divided over whether to maintain the cuts for those earning more than $250,000 annually.