The White House continued to hammer away this week on the U.S. Chamber of Commerce and other organizations that are using anonymous cash to fund TV ads on the campaign trail.

“If there are organizations raising tens of millions of dollars who won't tell us who their donors are, my guess is, they're not telling us for a reason: because they have something to hide,” said White House Press Secretary Robert Gibbs. 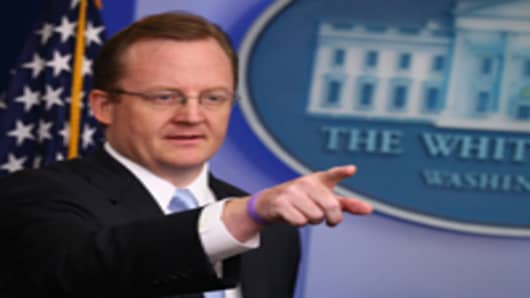 Meanwhile, an elected official in New York sought to persuade the nonprofits that have spent the most secret campaign cash to reveal their donors.

New York Public Advocate Bill de Blasio, a Democrat, sent a letter to 16 organizations Tuesday asking for their donor information. Collectively, the groups have spent more than $22 million in elections across the country just since September 1.

And although there are Democratic and Republican leaning groups on the list, the top seven groups tilt toward Republicans. All of the groups that have spent more than $1 million since September 1 skew Republican.

In his letter, which was obtained by CNBC, de Blasio said that shareholders have a right to know whether their companies are engaging in so-called “independent expenditures” of campaign cash.

“Taking advantage of Independent Expenditure groups, like yours, offers companies opportunities to avoid accountability for their political activities by concealing them from shareholders and consumers who may disapprove,” de Blasio wrote. “It also potentially keeps investors in the dark about whether their invested capital is being used for political purposes.”

But de Blasio may not have much luck getting answers.

"This simply appears to be another attempt to demonize specific groups and distract Americans from a failed economic agenda." -US Chamber of Commerce, Spokesman

The groups are well within their rights under tax law to refuse to disclose their donors. And groups on both sides of the ideological divide told CNBC they will continue to hide the names of their donors.

“We are not required to disclose,” said Elizabeth Shipp, political director of NARAL Pro-Choice America. “We are complying with the spirit and the letter of the law.” Shipp said that her group is non-partisan, although it has not endorsed any Republicans this year. “I can’t help that pro-choice Republicans can’t get out of primaries,” she said. “If there were a pro-choice Republican out there that I could endorse, I would.”

Similarly, a spokesman for the Republican leaning group The 60-Plus Association said it, too, would keep its donors a secret. “Sixty-Plus complies with all federal laws regarding disclosure and has no intention of complying with Mr. De Blasio’s request,” said spokesman Tom Kise.

At the U.S. Chamber of Commerce, a spokesman said he had not yet seen the letter. But, he added, “I can tell you that this simply appears to be another attempt to demonize specific groups and distract Americans from a failed economic agenda.”

Below is the list of organizations that have spent the most in political campaigns since Sept. 1: