Wednesday Look Ahead: Rising US Rates Are Getting Attention

Beware of rising rates. That was the chatter in markets Tuesday, and it may be again Wednesday as the 10-year yield rose to 3.167, its highest level since late June.

"The 10-year has been a real problem, and I think people are going to latch onto that and see how much of the pseudo-stimulus it can take." -UBS, Art Cashin

With little data on the horizon, the market focus will be more intense than usual on the Treasury's 1 p.m. auction of $21 billion in reopened 10-year notes.

Bonds sold off and yields rose Tuesday as the Obama tax compromise looked liked it would help shorter-term growth, but be ultimately bad for fiscal deficits. A number of economists raised their 2011 GDP forecasts to 3.5 percent or better, and there was a lot of speculation that the Fed may be able to shut down its quantitative easing program earlier than expected.

Stocks got an early lift from President Obama's announcement of a tentative compromise that would extend all Bush-era tax cuts and add a surprise, one-year payroll tax cut for all Americans.

But the rally fizzled as traders increasingly focused on rising bond yields. The dollar also strengthened and then, an unsettling news headline midafternoon about a new round of subpoenas in the government's broad insider trading probe helped eliminate more gains.

"It was the incredible shrinking rally," said Art Cashin, floor director at UBS.

During the New York afternoon, the Irish government won a majority in the first vote on its budget's financial provisions, and the IMF scheduled a Friday meeting to approve the 22.5 billion euro loan to Ireland. "You're going into another evening where anything can happen in Europe," Cashin said. 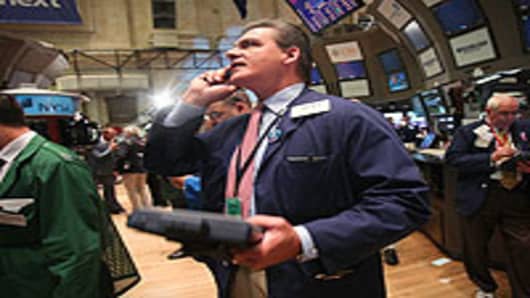 Getty Images
Traders work on the floor of the New York Stock Exchange.

But it's the Treasury market he's watching Wednesday. "The 10-year has been a real problem, and I think people are going to latch onto that and see how much of the pseudo stimulus it can take," he said. Cashin said stocks could start to stall if the 10-year gets to the 3.5 percent level. "It's an area of concern," he said.

Traders said the yield's move above the key 3.06 percent threshold was important technically, and the next stopping point could be 3.2 percent. The fear is consumer rates will also rise. According to Reuters, LendingTree.com Tuesday was reporting a jump in 30-year fixed mortgages to 4.78 percent, up from 4.67 percent Monday.

"The prevailing winds are pointing to higher rates," said John Briggs, Treasury strategist at RBS. He said if the 10-year auction goes well, that may help attract buyers and his view is that rates do not continue to climb into year end. Tuesday's $32 billion auction of 3-year notes turned in an average performance, but Briggs noted that there was no aggressive demand.

"People could stand back.. It's risk apathy as someone called it...I don't have a real sense of how the (10-year) auction is going to be because I don't feel that people want to be involved,' he said.

J.P. Morgan was one of the firms that raised its GDP forecast Tuesday. In a note, economist Michael Feroli said the projected increase in consumer spending resulted in a new forecast of 2011 real GDP growth of 3.5 percent from a previous 3 percent.

The rise in rates also helped support the dollar Tuesday. Deutsche Bank chief G-10 currency strategist Alan Ruskin looked at the rate rise in a note late Tuesday, and he said the reaction in stocks are the key as to whether the steepening curve is a problem.

"How worried the market should be about this implied Treasury tightening in monetary/financial conditions will be dependent on whether equities see a steeper curve as indicative of stronger growth, or, a sign of Fed’s premature loss of control of the yield curve. For now I suspect that as long as l0-year yields do not soar much above 3.25 percent, the market will give the Fed the benefit of the doubt and bond yields will be seen as consistent with ongoing recovery, such that yields slow but do not turn the equity market around," he wrote.

On a light day for earnings reports, McDonald's is expected to report its November sales on Wednesday morning.