The Banality of Goldman's Business Standards 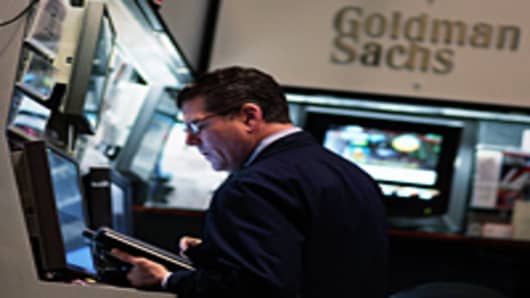 Although the report from the internal business standards committee at Goldman Sachs begins by acknowledging that the financial crisis had a profound impact on Wall Street, American businesses and households, it falls far short of rising to the challenges created by that impact.

Goldman was driven to initiate a review of its business practices and standards by an irony. The firm had outperformed nearly all of its Wall Street rivals, literally outliving some of them, through the financial crisis. It believes its risk management was so good that the firm, perhaps uniquely, had no need for government aid in 2008. Its traders reacted to the bursting of the housing bubble earlier and with more agility than those at any other big firms.

But Goldman's success was also its undoing. Successful trades against the housing bubble came to be seen as nefarious and fraudulent. Instead of being viewed as a nimble market player, able to skillfully negotiate rapidly changing market conditions, Goldman was described as a bubble machine that profits when bubbles inflate and when they burst. The outsized returns on Goldman's equity became the blood funnel of the vampire squid.

Surviving one crisis had brought about another. Goldman came to stand in for everything that was wrong on Wall Street. Nearly every essay critical of a practice in the financial world published in the last two years has named Goldman. It was a heuristic, a short hand for financial evil.

There was some hope, initially, that Goldman might produce something truly profound in response to the crisis. Although Lloyd Blankfein is commonly understood by long-time Goldman employees and alumns to lack the philosophical or moral depth of some of his predecessors, some thought that the crisis may have awoken something inside of the man. Something that pointed beyond profit and loss to a deeper understanding of the role an investment banking and trading firm like Goldman plays in the world.

This deserves a bit more explanation. Hank Paulson, Blankfein's predecessor at the top of Goldman, was a man of deeply felt moral and philosophical commitments. Those spread through the firm in myriad ways. Still to this day, there's a strong dedication to conservation of the environment — Paulson was chairman of the Nature Convservancy — that strikes many who encounter it as surprising. Go to a charitable event raising money for something like, say, cleaning up rivers around New York City and you'll find it packed with Goldman executives. Something similar can be said for Goldman's dedication to Asian growth — it's spoken of in tones that almost suggest a religious impulse.

Do not get me wrong. Despite the occasional grumbling by some investors that Goldman's environmentalism was standing in the way of profit-making, Goldman's social commitments always had a link to profiteering. Sure the bond traders might talk a good game about the duty to be stewards to nature, but they also wanted to trade carbon credits.

Nonetheless, Goldman had a reputation for being a good citizen. Depending on who was running the place, the expression of good citizenship might change. But the idea was that Goldman thought about and nurtured its role in the community and the world in a way that was rare on Wall Street. Certainly nobody thought Jimmy Cayne's Bear Stearns or Dick Fuld's Lehman Brothers spared much grey matter on such things.

When Blankfein was tapped as Paulson's successor, there were two principal gripes against him from insiders. The first was that he wasn't particularly known for being oriented toward clients, at least not in the way that Hank Paulson was. Blankfein was a rip-your-face-off trader, a guy who could joke that he didn't have customers, just adversaries.

The second source of griping was the perception that, as one Goldman alumn put it, Lloyd lacks a life. However great his understanding of markets, his appreciation for the need to keep his firm nimble enough to succeed despite radical uncertainty, and his respect for Goldman's internal culture, there seemed to many at the firm to be something missing from his personality. The external evidence for this was just that Blankfein didnt seem to do very much else, didnt seem to care about very much else, outside of what happened on the trading floors and board rooms of Goldman.

This is not to say that Blankfein is uncharitable or uncaring. Under his tenure, Goldman Sachs has done amazing work with small businesses and with women in business. The firm still encourages charity work by employees, including work with poor children in Brooklyn or sending gifts to the families of servicemen living abroad. Goldman doesn't make a big splash about these smaller charitable efforts but they are certainly ongoing.

But there's no getting around it. Blankfein is perceived to be something like one of Neitzsche's Last Men — incapable or, more damningly, uninterested in intellectually confronting the deeper truths or fundamental facts of the world. He is content to be a great manager of an excellently run firm. But this amounts to a nihilism that is one part bureaucratic and two parts capitalistic.

It's often easy to mistake nihilism for realism. After all, commitments that extend beyond what is justified by the evidence of our senses — and Hank Paulson had a great many of these — can seem a distraction. The markets move not on abstract principles but because of the aggregated buying and selling activities of investors and speculators. Its tempting to say that a guy in Blankfein's position should avoid the allure of philosophizing.

To put it slightly differently, why should a realization of the dignity of simply making money denigrate the dignity of our other human pursuits? What if the reason for Goldman's historic outperformance was that it was more fully open to the potentialities of human beings than its rivals? The narrow glance of the world through Blankfein's eyes may mean a firm that is ultimately myopic. Perhaps the irony of Goldman producing a crisis through outperformance is an effect of this myopia.

The business standards review produced a paper that is aimed at addressing the first gripe against Blankfein and the firm he has run for several years — that it is not client oriented. It uses the word client some 372 times. It is meant to reassure Goldman's clients, to placate regulators, and to direct employee activity.

Unfortunately, the paper ignores the second gripe. It lacks any attention at all to a higher understanding of the purposes of Goldman Sachs. It reads more like a consultants brief — banal, crowd-pleasing, and recommending organizational changes. It will, for this reason, be little read and less heeded.

And that's a further irony. By producing a report that hews so closely to the known paths the business standards committee has rendered itself less effective than it would have been if it dared to aim at something more profound.