Bear Investor Says 'I Have Been Too Bullish'

Albert Edwards, a global strategist at Societe Generale well known for his bearish stance, said late Monday he has got it wrong and that he has been too bullish.

“I have long believed that a lost economic decade was an inevitable consequence of the gross mismanagement of central banks," Edwards wrote in note to clients. 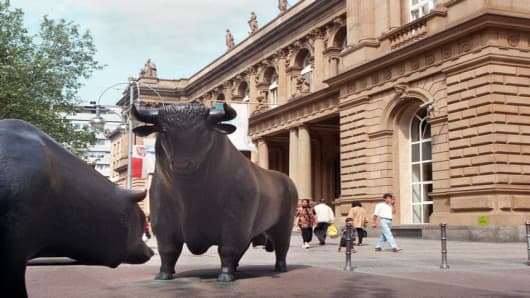 "Our Ice Age thesis called for a long secular equity valuation bear market, just like Japan. Most reject the comparison with Japan, especially with regard to the US having better demographics. Indeed I felt that beyond the lost decade and secular bear market, the US outlook was much more upbeat that Japan's," he explained.

“But now, I am thinking I might have been too bullish,” Edwards added.

“There we were at the end of August – with the S&P down some 6 percent and the economy maybe heading for a double-dip – and lo, with the promise of quantitative easing 2 coming down the tracks, the market managed to put on some 16 percent in the final third to leave us up a respectable 13 percent for the full year," he wrote.

A Washington Post op-ed by Ben Bernanke spelt out his objectives perfectly, he said.

Bernanke's idea was that higher stock prices will boost wealth and confidence, spurring spending, which in turn would lead to higher incomes and profits that would further support economic growth, according to Edwards.

“And so it came to pass. From the end of August stocks rallied. Leading indicators recovered. Spending increased. Jobs picked up. A virtuous circle indeed," he wrote.

"Unfortunately, though, policy makers have yet to learn the lessons of the Great Recession. Basing economic growth on loose monetary policy driving up asset prices is simply doomed to failure,” he added.

Edwards said he feels like the last bear standing on the sell-side, a position he has some experience of. He had for a time believed America's demographics would prevent a Japanese style lost decade.

“I have warned for almost 15 long, depressing years that when the US asset and economic bubble burst, the post-bubble economic and market outlook would closely resemble that of Japan," he wrote.

"I expected that the secular equity bear market would stretch over more than a decade, although punctuated by sharp cyclical rallies. But there were some key differences between the US and the Japanese conjuncture.”

“Although most perpetually bullish commentators focused on the US upside relative to the Japanese experience, I also felt that in many ways the US was rather worse off than Japan,” Edwards explained.

“On the other hand, two key differences also stood out for me in favor of the US. First, with their contrasting positions on external balances, the US looked far more likely to see a weak dollar as opposed to Japan, which suffered a strong yen. Second, the demographic situation was far better in the US than in Japan.”

Japan's "terrible" demographics are self-evident but, Edwards warns, even rapid population growth is not a sufficient condition in itself for rapid economic growth.

“If that is the case, as the former baby-boomers start to retire this burgeoning cohort will tend to liquidate assets," he explained.

"This only exacerbates the secular bear market for property prices (which have already begun to decline again) as well as the equity market. This means that Bernanke for all his efforts may not be able to prevent the secular valuation bear market fully playing out until rock bottom valuations are reached,” Edwards concluded.