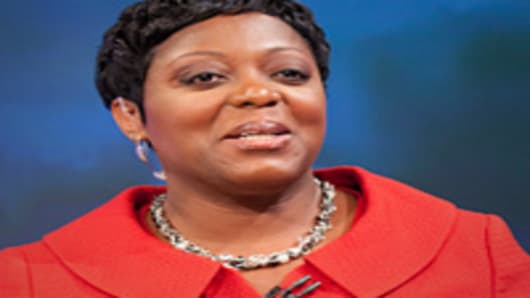 Velma Hart, who told President Obama last fall she was "exhausted" defending his economic performance, has a new job.

Hart gained national attention for her remarks to Obama during a CNBC Town Hall last September. Later, she lost her own jobdue to recession-related cutbacks at the veterans service organization where she had served as chief financial officer.

Now, Hart has landed a position as Washington director of Giving Initiatives Inc.,an Atlanta-based non-profit organization that offers services to disadvantaged children and young adults. She said the organization will be seeking private-sector financial partners for its work.

"The reality of this economy is we can't depend on government funding for programs to help our communities," Hart said.

That's not the only employment Hart is beginning. She has also accepted a part-time job with B-Security Systems LLC, a firm offering identity-theft protection services.

Hart noted that the two months she spent seeking work was nothing like the experience of most unemployed Americans. Because of the national spotlight she received from her exchange with the president, Hart received offers of help and expressions of support from "around the world."

Despite her frustrations, she never turned away from supporting Obama. She praised his recent calls for public-private partnerships, and his outreach to business such as this week's address to the US Chamber of Commerce.

"He's really trying to engage the right people," she said.

To continue speaking out publicly, Hart plans soon to launch a blogcalled The Hart of the Matter. Though the blog is not yet active, it can be found eventually at www.velmarhart.com.