Every Parent's Nightmare: Your Grad Is Moving Home

In the mail last week came a newsletter from the Office for Parent Programs at USC, where our son is a freshman.

Back in my day, there was no such "office." Parents packed you off to college, and you didn't see them again until Thanksgiving or Christmas. Mom and Dad got caught up on the progress of your education only if they got a letter saying you'd been placed on academic probation. Upon graduation, you were expected to have a job lined up (or graduate school for those seeking to put off the inevitable).

However, in the newsletter we received from USC was an article called, "A Full Nest Once Again: Preparing for Your Graduate to Move Back Home." Nooooooo. No no no. That's what parents pay tuition for—so universities can help prepare our children NOT to move back home. And yet Adecco, a global HR consulting firm, claims in a survey of more than 500 recent graduates that 40 percent of those who graduated in 2008...moved back home...into their old rooms...the rooms you turned into offices or gyms. Remember, June 2008 was BEFORE the economy completely imploded, and yet two out of five grads weren't ready to leave the nest. 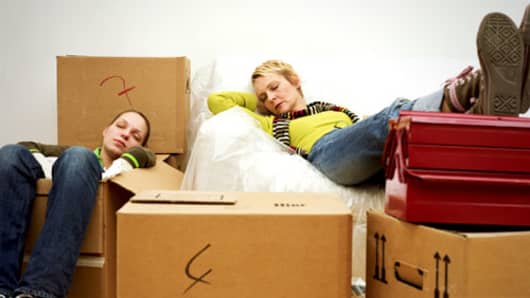 It reminds me of the scene in "The Graduate", when Ben Braddock is "drifting" in a pool as his father complains, "What were those four years of college for? What was the point of all that hard work?"

On average, it is taking graduates six months to find a job if they don't have one lined up before graduating. Yes, it's a rough job market out there, but can we blame the delay on that? Here's the survey result from Adecco which really got me: grads are not applying to many jobs. Over half, 55 percent, have only applied to between ZERO and five jobs since graduation. You can't get work if you don't seek it.

For sophomores and juniors, here's a survey finding you should take to heart. Adecco says most recent grads regret they didn't do more long before commencement to lock down employment, whether it was starting the job hunt sooner, networking more, or applying to more jobs (see above).

There is a silver lining, perhaps.

Kids these days don't expect the kids of tomorrow to take care of them. Only one in five in the Adecco survey believes Social Security will still be around by the time they retire. Of course, if they're still living at home, they may not need the money...