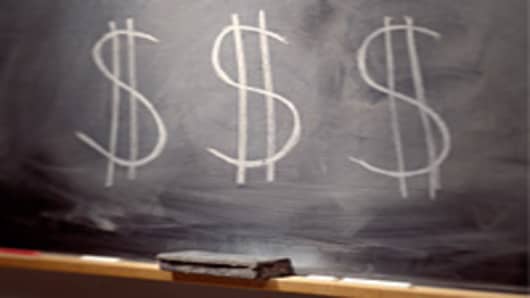 The basic accounting assumption that underlies pension fund valuations may be a huge gift to private equity funds.

Almost all state and local governments assume that pension funds will earn around 8 percent a year, which is roughly the historical return of the stock market.

Making those expected returns is absolutely crucial to pension funds.

If returns are just one point lower, the gap between what pension funds have promised to pay retirees and their ability to pay would grow to $1.3 trillion. That gap would have to be filled by raising taxes or lowering benefits.

The gentlemen who run some of the world's biggest private equity companies and hedge funds do not think that pension funds will be able to earn those kind of returns in the stock market. They expect future returns on stocks to be lower than 8 percent. And, as a result, they think pension fund managers will be obligated to invest with them to make ends meet.

"More and more money is likely to go into private equity, particularly from the public pension funds," the Carlyle Group's David Rubenstein said at the Milken Institute's Global Conference on Monday.

He went on to explain that the widening funding gap would force the pension fund managers to allocate more money to private equity funds.

Many pension funds are already underfunded even if they earn their forecasted annual returns, so strictly speaking Rubenstein might not have been saying that they won't be able to earn 8 percent.

But, speaking anonymously, a top private equity manager told me that everyone expects that underperformance of the broader markets will widen the funding gap even further.

"Look. The pension fund managers are our limited partners, so we don't want to publicly criticize their forecasts. But when we're talking to them, it's often under the assumption that they need assets that will out-perform the market," he said.

That widening gap will be very lucrative for private equity executives, who typically charge fees for the total amount of funds they manager. The bigger their funds get, the more these fees enrich them.

Even if you believe — as I do — that government workers are not grossly overpaid, you can see that states and local governments have not set aside nearly enough money for their employees’ retirement.