Saudi Prince Alwaleed bin Talal called on US lawmakers to raise the debt ceiling, while also warning that steps must be taken to control government spending. 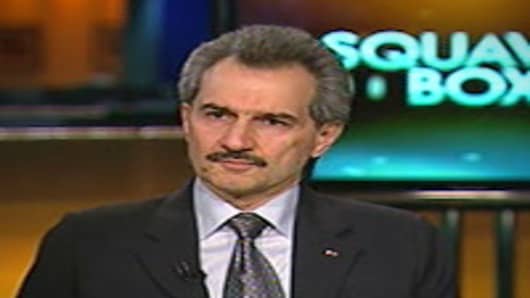 The renowned investor and philanthropist, and nephew of King Abdullah, also rejected the notion that the US could delay payments on its bonds for several days as has been suggested by Rep. Paul Ryan and hedge fund manager Stanley Druckenmiller.

"You need some structural changes in the United States," he added. "You can't go forever with $1 trillion in arrears. That's the thing."

However, the suggestion is untenable that the US could miss debt payments while it argues over the debt ceiling and works up a budget plan that addresses deficit issues, he said.

"That's gambling. This is the United States. You're leading the whole world," bin Talal said. "You cannot play games with that."

Economic growth will be slow, the prince added, believing that the trend will be closer to 2 to 3 percent. However, he said the Federal Reserve's exit from the marketswith the end of the second leg of quantitative easing—QE2—next month is unlikely to have much impact.

"You're going to have some low growth for the next several years to come for sure," he said. "You have a lot of pressures—state deficits, the budget deficit—many issues coming in the United States." 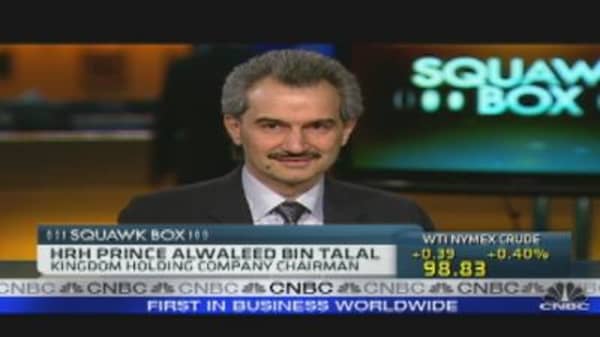 One other pressure on the domestic economy has come from inflation, with prices at the pump near $4 a gallon and crude oil near $100.

The prince said oil should be in the $70 to $80 range and it is not in Saudi Arabia and OPEC's best interests for the price to be at the current elevated levels.

"Our objective is not to have the price shoot above $100 and not have the per-gallon price in the US hover around $4," he said. "It's away above breakeven."

On international issues, Alwaleed said the US needs to play an active role in peace negotiations and generally approved of President Obama's remarks Thursdaythat Israel-Palestinian borders should return to conditions prior to the Six Days War in 1967.

He also praised the US for killing terror leader Osama bin Laden but believes the war on terror is far from over.

"The fact that bin Laden has been taken care of and thrown in the sea, and hopefully some sharks ate him already, the world is a lot better at least psychologically," bin Talal said.