The anti-corruption group Global Witness says it has obtained a document that details for the first time the involvement of Western banks—including some in the U.S.—in financing the regime of Libyan leader Muammar Gaddhafi. 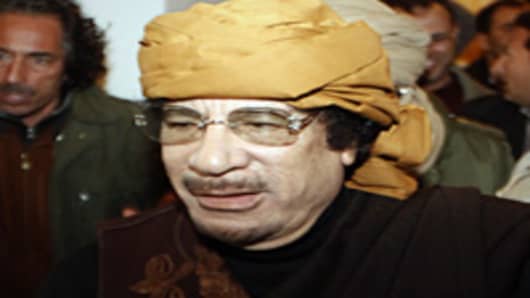 The report, entitled "Libyan Investment Authority—Management Information Report," is dated June 30, 2010, less than six months before Libya plunged into war and the Obama administration ordered the freeze of more than $30 billion in Libyan assets—the largest seizure ever orchestrated by the U.S.

U.S. authorities have refused to say where the assets are located, however. While there was nothing illegal about any of the banks holding Libyan investments after U.S. sanctions against the regime ended in 2008, activist groups say public has a right to know where the money is.

While Global Witness will not say how it obtained the document, the report says the largest Western holder of Libyan cash as of last June was HSBC at nearly $300 million, followed by Goldman Sachs at $43 million.

But the regime held billions more in structured products like hedge funds, the report says, including $1 billion invested with Societe Generale, and $171 million at JPMorgan Chase. The largest portion of the assets, $19 billion, was deposited in Libyan and Middle Eastern banks, according to the report.

Goldman Sachs and JPMorgan Chase declined to comment, citing client confidentiality rules. HSBC did not respond to CNBC's request for a comment.

Societe Generale issued a statement saying, "Societe Generale deals with many sovereign funds and complies with all applicable rules and regulations in that matter. The bank cannot comment on any specific client or transaction."

But Global Witness says the banks have a duty to disclose the information to the Libyan people, and calls the banks' refusal to comment "absurd."

"These are state accounts, so the customer is effectively the Libyan people and these banks are withholding vital information from them," said Global Witness director Charmian Gooch in a statement.

The group is also calling on regulators around the world to make certain none of the funds are being diverted to the Gaddhafi family. A U.S. Treasury Department Official would not comment on specifics about the asset freeze.

In addition to the cash, hedge fund and derivative holdings, the report says the Libyan government owned billions of dollars in stocks and bonds. Its largest U.S. holding: a $217 million stake in General Electric—a part owner of NBCUniversal—which the report lists as a "non-strategic" investment.